The Road to 270: West Virginia 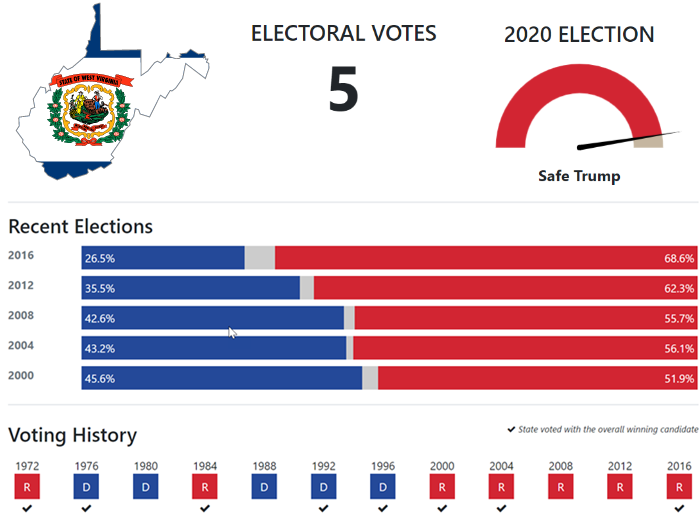 West Virginia has undergone an astounding political reversal in the last two decades. The state began reliably voting Democratic in 1932, when Franklin Delano Roosevelt picked it up as a part of his New Deal Coalition. Between 1932 and 2000, the state only voted Republican in the landslide elections of 1956, 1972, and 1984. George W. Bush’s victory in West Virginia in 2000 marked a turning point for the state. In each election since 2000, the Republican nominee has expanded on his predecessor’s margin of victory. This progression culminated in 2016 with Donald Trump’s 68% to 26% blowout over Hillary Clinton.

To understand West Virginia’s politics, it’s important to know the state’s history. West Virginia and Virginia were once just one state called Virginia. While the cultural and geographic divide between the two regions had been simmering for decades, Virginia’s secession from the Union in 1861 exacerbated resentment in the western portion of the state. Two-thirds of delegates from the western portion of the state voted against secession. After the state decided to leave the Union, western Virginians, fed up with being dominated by their eastern counterparts, began to form their own state. They were officially accepted into the Union two years later.

West Virginians initially voted with Abraham Lincoln’s Republican Party in 1864. The state then flipped between parties several times over the next 70 years. It eventually settled in as reliably Democratic during FDR’s presidency. It would remain safely blue, except in landslide elections, for the next 70 years.

Coal and coal mining are central to life in West Virginia. The state flag and seal features a miner with a pickaxe, anvil, and sledgehammer. Even the state’s pledge of allegiance references “rich veins of coal”.

West Virginia’s population has tracked with the demand for coal and the number of mining jobs available. It dropped from 2 million to 1.75 between 1950 and 1970, rose again to nearly 2 million by 1980, then fell again to about 1.8 million by 1990. Until recently, the population remained relatively constant, peaking again at 1.86 million in 2012.

In just six years, though, from 2012 to 2018, West Virginia’s population fell about 50,000. This is, as before, partly due to the number of mining jobs. In 2011 the state had 23,000 coal mining jobs, but by 2018 there were just 14,000. Decrease in coal purchases from China, substitution by cleaner alternatives like natural gas, and more coal production in other areas of the country, has reduced the demand for coal, and the associated jobs, in West Virginia.

The Great Depression and violent, failed mining strikes in the 1920's had decimated union membership in Appalachia. Before Franklin Delano Roosevelt’s presidency, the United Mine Workers of America (UMWA) had fewer than 1,000 members in West Virginia. Roosevelt’s New Deal Coalition, in particular his pro-union stance, helped him, and the Democratic Party, win back the state. The last Democrat to win West Virginia had been Woodrow Wilson in 1912. In 1928, Republican Herbert Hoover beat Democrat Al Smith 58% to 41% on his way to winning the presidency. Four years later, Roosevelt dominated the incumbent by 54% to 44%.

Roosevelt’s New Deal allowed the Union to begin organizing and rebuilding its strength. The National Industrial Recovery Act, passed in 1933, allowed collective bargaining, outlawed so-called “yellow-dog contracts” and made other pro-union reforms. Between 1933 and 1945, national union membership nearly quintupled from 3 million to 14 million. By 1969, 90% of West Virginia miners were members of the UMWA. This union power, along with the popularity of Roosevelt’s other New Deal social programs (in particular Social Security) helped Democrats win the state for most of the next half century.

The state’s political leanings would change quickly and intensely. Bill Clinton easily won the state in both of his presidential elections — carrying it by 13% in 1992 and 15% in 1996. Four years later, Republican George W. Bush beat Democrat Al Gore by 6% (52% to 46%).

In 2000, George Bush positioned himself as the candidate for coal. He supported mountaintop mining, investing in clean coal technology, and favorable trade policies for coal. Al Gore, on the other hand, wanted to curb carbon dioxide output and was seen as an extremist by many in West Virginia. The economic interests of coal industry and its workers and the social conservatism of West Virginia, in particular on gun control, tipped the state to George Bush.

Democrats have not done much to help themselves in the socially conservative state that still relies on coal. Barack Obama restricted permits to allow mountaintop mining, using the authority of the Clean Water Act to do so. When Hillary Clinton, at a 2016 CNN Town Hall in Ohio said^, “we're going to put a lot of coal miners and coal companies out of business”, she further cemented her doom in West Virginia. The UMWA, once resolutely supportive of Democrats, did not endorse presidential candidates in 2012 or 2016.

Even if the UMWA had endorsed, it would have likely made little difference. Labor unions in West Virginia have lost the influence they once had. In 1969, 90% of miners were union members and as of 2017, this had declined by two-thirds. Automation, the decline in mining jobs, and West Virginia’s status as a “right to work” state have contributed to the decline.

Not everything, however, revolves around coal and mining. West Virginia’s expanding Republican margins mirror national trends. The state is rural and sparsely populated, with just 77 people per square mile. There are no major urban centers — the biggest city in the state is Charleston, with only 47,000 residents.

West Virginia is 94% non-Hispanic white, behind only Maine and Vermont. And the state has the highest proportion of non-college educated whites. These voters are the core of the Republican Party and make up 75% of West Virginia residents. The state’s population is also very religious and skews older, two hallmarks of the Republican coalition.

West Virginia also ranks first for opioid deaths and prescriptions per capita, fourth for poverty rate, fourth for number of food stamp recipients, and third for population loss. These unfortunate titles characterize a struggling population unsatisfied with the direction of the country.

Perhaps it is unsurprising that “Make America Great Again” resonated with these voters. Trump’s margin was the largest margin in the state’s 156-year history and 39 presidential elections. It was one of just two states, the other being Oklahoma, in which Trump won every county.

West Virginia’s reversal on the presidential level was quick — it only happened 20 years ago.

The toppling of down-ballot Democratic power is even more recent. In 2014, the third and final West Virginia congressional seat fell to Republicans. That same year Republicans also flipped one of the U.S. Senate Seats. Then, in 2014 both state legislative chambers flipped to Republicans for the first time since the 1930's.

Democrats thought they got some relief when their candidate for governor, Jim Justice, won in 2016. But Justice flipped and became a Republican one year later.

The only federal power that Democrats have in the state lies with U.S. Senator Joe Manchin. However, in keeping with his constituency, he campaigns and votes as one of the most conservative Democrats in that chamber. In a 2010 campaign ad he literally shot a rifle through Obama’s cap and trade bill. More recently, he was the only Democratic Senator who voting to approve Neil Gorsuch and Brett Kavanaugh to the Supreme Court.

As late as 1960, West Virginia had six congressional districts and eight electoral votes. By 2012, this had fallen to three and five, respectively. As one of just three states to have lost population this decade, the state is likely to lose another district (and electoral vote) following the 2020 Census.

For the 2020 presidential election, West Virginia will have five electoral votes. And while the state was once a reliable member of the Democratic New Deal Coalition, it is now one of Republicans’ easiest wins. The reversal, at least on the presidential level, is complete. Even a year out from election day, it’s safe to etch West Virginia’s five Electoral College votes in the Republican column.

^ For the record, that often-quoted comment didn't capture the full context of what she actually said.