The Road to 270 will be published every Monday. The column is written by Seth Moskowitz, a 270toWin elections and politics contributor. You can reach Seth at s.k.moskowitz@gmail.com or on Twitter @skmoskowitz. 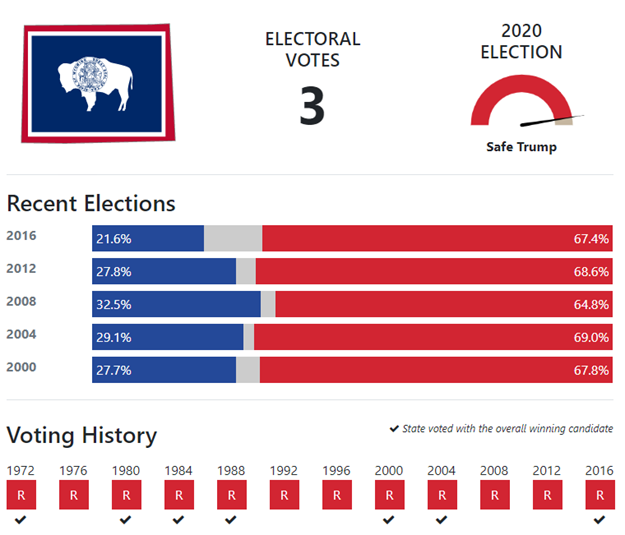 The Strength and Weakness of Wyoming Voters

In presidential elections, Wyoming voters are electorally powerful but more-or-less ignored by the nominees. The state is the most over-represented in the Electoral College but has voted the same way for over half a century.

Wyoming is allocated three electoral votes — one for each U.S. Senator and one for its at-large U.S. House Representative. At 570,000 residents, it is the least populous state in the country. There are just 190,000 people per electoral vote, the lowest ratio of any state. Compare this to California, with a population of nearly 34 million and its 55 electoral votes. Here, there are over 600,000 residents per Electoral College vote.

However, Wyoming’s Electoral College votes are also essentially preordained to go to the GOP. In 2016, Donald Trump won here by a 46% margin over Hillary Clinton, making it the least competitive state* in the country. This margin and lack of competition means that there is little voters or activists could do in recent elections to change the state’s electoral prospects. This is almost certainly going to be the case again in 2020.

Wyoming has been dark red for the past five decades. It is tied with eight other states for the longest ongoing Republican streak in presidential elections. These states have all voted for the Republican nominee going back to 1968 (see map below). This was the first election following Democrat Lyndon Johnson’s 1964 landslide, when he just lost just six states — five southern ones and Arizona — to Barry Goldwater. This Republican control has not been isolated to the presidency. The last time Democrats won a federal election was a U.S. House race in 1976. Voters last elected a Democratic Senator in 1970. Further down-ballot, the state government has been locked in a Republican trifecta since 2011 when Gov. Dave Freudenthal — the last Democrat to win a statewide office in Wyoming — completed his second term.

Not surprisingly, this has led to large and expanding Republican margins in recent presidential elections. Each year since the turn of the century, Wyoming has been around 20-25% more Republican than the nation overall. Going back to 2008, John McCain easily defeated Barack Obama in Wyoming by a 32% margin (65% to 33%). Four years later Mitt Romney expanded that margin to 41% (69% to 28%). In 2016, Trump beat Hillary Clinton by 46% (68% to 22%). In just eight years, Republicans expanded their already dominant 32% margin another 14%, to 46%.

The state is divided into 23 counties, 22 of which Trump won in 2016. The only district that voted for Clinton is Teton County on the western border of the state. It had only about 13,000 voters in 2016 and gave Clinton 58% to Trump’s 31%. The county’s demographics help explain its blue tint: 54% of its population have a bachelor’s degree or higher, double that of Wyoming overall.

Demographics also explain the largely Republican dominance outside of Teton County. Wyoming’s eligible voting population is 88% non-Hispanic white. 63% of the state’s voting population are non-college educated whites, a key demographic of the Republican base. Interestingly, though, Wyoming has the second highest high school graduation rate in the country. This leads to a dichotomy, where Wyoming ranks 40th among the states for proportion of college graduates but 2nd for high school graduates.

That educational split becomes less surprising when considering the jobs that drive the economy. The state's largest industry is mining and extraction. It is the nation’s number one producer of coal, responsible for 42% produced in the country. Coal, natural gas, and the mining of other minerals helped buoy the state’s economy during the economic recession a decade ago. But, when energy prices fell in 2014, Wyoming was hit especially hard.

Since the turn of the century, when George Bush ran on support for mountaintop mining, the Republican Party has been seen as the party of coal. Meanwhile, Democratic efforts to reduce carbon emissions has been seen as an attack on coal and coal miners. When Hillary Clinton said, “we're going to put a lot of coal miners and coal companies out of business” at a 2016 CNN Town Hall^ in Ohio, it likely did little to help her with voters here.

Wyoming is also one of the most sparsely populated states in the country. Only Alaska is less dense. There are just 6 people per square mile. This is partly because a huge portion of the state’s land is owned by the federal government. The state has a portion of Yellowstone National Park, Grand Teton National Park, and several national forests. Most of this land is along the western border with Idaho. There is also the Wind River Indian Reservation, the seventh largest reservation in the country, which comprises over 3,400 square miles.

Wyoming’s sparse population is also due to the lack of any major urban center. The largest city, Cheyenne, has only 64,000 residents. Cheyenne is not dense for a city, with just 2,400 residents per square mile. Compare this to its neighbor, Denver, Colorado, which has over 700,000 residents and 3,900 people per square mile.

Not Your Typical Republican

Despite its deep red nature, Wyoming has a unique breed of Republican. The state is more libertarian and less Christian conservative than most other Republican strongholds. Ted Cruz won 66% in the state’s 2016 primary while Trump only received 7%. Republicans in Wyoming don’t always align with their party on hot button issues like transgender “bathroom bans”, gun rights, and tightening access to the ballot box. Laramie, a city in southeastern Wyoming, recently passed an ordinance banning discrimination on the basis of sexual orientation or gender identity.

Despite these libertarian (and occasionally progressive) tendencies, Democrats have no federal representation and number in the single digits in both the State House and State Senate. Republicans — libertarian or otherwise — have the state locked down. This doesn’t look to be changing anytime soon, especially not before next November.

* Washington D.C. has been less competitive than Wyoming, as we covered last week, but it is not a state.

^ For the record, that often-quoted comment didn't capture the full context of what she actually said.