As it does each December, the Census Bureau released an update of U.S. population figures as of July 1st. Total U.S. population increased about 0.6% to 327,167,434 from 2017. Nevada, Idaho and Utah were the fastest growing states at about 2% each. Texas and Florida gained the most people - over 300,000 each, more than twice as many as any other state. Nine states lost population, led by New York and Illinois.

The new figures also allow for extrapolation of population changes by state out to 2020, when the next Census will take place. The actual population figures from the 2020 Census will determine the number of congressional districts in each state over the next decade. It will also lead to a change in the electoral map, as each state receives electoral votes equal to its total congressional delegation (House + Senate). The new electoral map will be effective for the 2024 presidential election.

The map below shows how the 2016 election would have turned out if the projected 2024 map had been in place. It is based on the long-term population trends (2010-18), but the map is exactly the same if we look at medium-term trends (2014-18). Donald Trump would have received three additional electoral votes, giving him 309*. Click or tap the image for an interactive version of the map for each presidential election from 2000 through 2016. 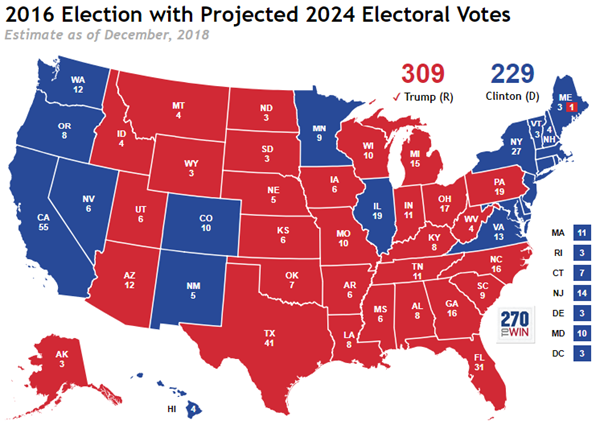 Congressional districts by state are based on estimates by Election Data Services. Post-2020 changes can be seen in their map below (add two - for the number of Senators - to get a state's electoral votes).  There is only one difference from last year's projection: Montana is now forecast to gain an electoral vote at the expense of New York. If that comes to pass, it will mark the 8th consecutive decade the Empire State has lost two or more seats in reapportionment. Overall, Texas and Florida still look to be the big winners after 2020, gaining three and two, respectively. 12 states, including Montana, are projected to gain or lose a seat, as necessary to keep the total number of districts at exactly 435. 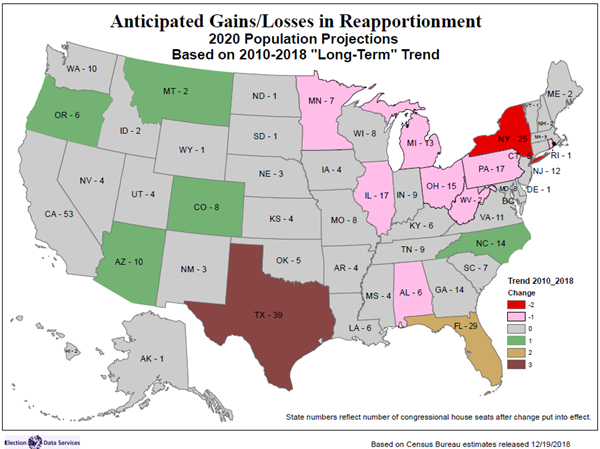