The 2020 Senate Interactive Map is now available. 34 seats will be contested in the upcoming presidential election year, 22 of which are currently held by GOP incumbents. That's a considerably different case than this year, when Democrats had to defend 26 of the 35 seats. However, most of the 2020 GOP-held seats - and one Democratic one - are in deep-red states, limiting the paths available for Democrats to retake control.

When the new Senate is seated in January, Republicans will hold a 53-47 edge. That means in 2020, Democrats will need to gain 3 or 4 seats to win the majority. The smaller number will come about if Democrats are able to win the presidency, as a 50-50 Senate tie is broken by the Vice-President. The interactive map lets you choose which party will win the 2020 election - use the 'VP' box near Florida.

In a bit of good timing, the initial 2020 Senate ratings from Sabato's Crystal Ball are also out today. Click or tap the image below to start your own 2020 forecast. 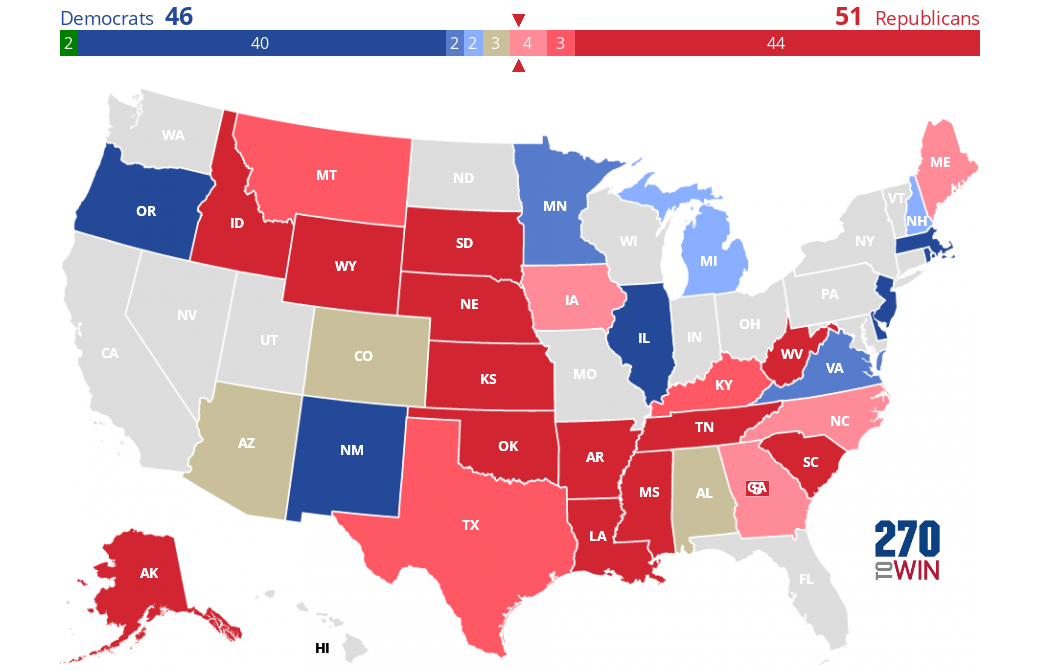 The initial ratings give the GOP 51 seats, although it could very well be 52. The reality - as noted in the Crystal ball article - is that starting Alabama as toss-up is being very generous to the Democratic incumbent there. This is particularly true in a presidential election year.  The other two toss-ups, Colorado and Arizona*, represent the best Democratic pick-up opportunities in 2020.

After this first tier of competitive races, Democrats could also find opportunity in North Carolina, Iowa and/or Maine, while the GOP would likely look to New Hampshire, Michigan and/or Minnesota.  How much success either party has in flipping these states will likely be pretty closely tied to how it's nominee is performing in the presidential election.

The importance of the presidential election is a key takeaway from the Sabato analysis: "the Senate races and the presidential race probably will work at least somewhat in tandem, meaning that it’s hard to imagine Republicans holding the White House while simultaneously losing four net Senate seats. So winning the White House is likely a necessary but not sufficient condition for a Democratic Senate takeover."

* A special election to complete the final two years of John McCain's term. Gov. Doug Ducey appointed Sen. Jon Kyl after McCain's death earlier this year. Kyl - or perhaps someone else - will serve until 2020.