After the Midterms: Partisan Control of the U.S. House by State

August, 2020: You can now game this out for the 2020 election with the House State View feature.  Try it here for the current consensus forecast.

July, 2019: Michigan Rep. Justin Amash resigned from the GOP to became an independent in July, 2019, breaking the tie in that state's delegation.  It is now 7-6-1, with Democrats in the majority. Across the 50 states, Republicans have the majority in 26, Democrats 23, with one tie.

Original Article: Although a handful of districts remain uncalled, we now know which party will be in the majority in each state's 2019 U.S. House delegation. Republicans will have the majority in 26 states, while Democrats will have the most members in 22.  Two states, Michigan and Pennsylvania will be tied.  The concentration of Democratic districts in a small number of states gives the GOP a structural advantage in this count. They will hold the lead despite a Democratic majority overall. 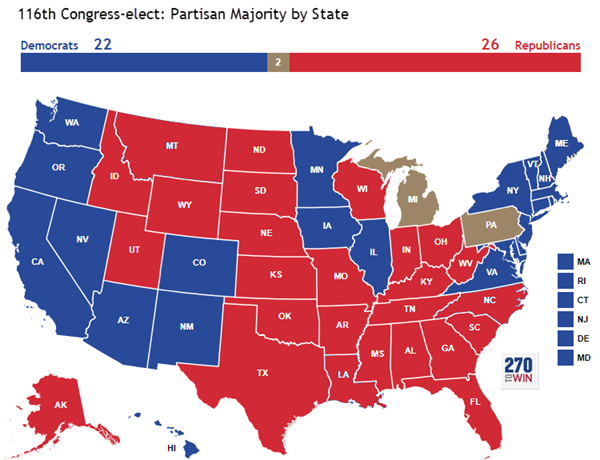 However, this marks a significant improvement for Democrats relative to the current House, in which the GOP has a partisan edge in 32 states to 17, with Maine the lone tie. Come January, Democrats will be in the majority in five additional delegations: Arizona, Colorado, Iowa, Maine and Virginia. 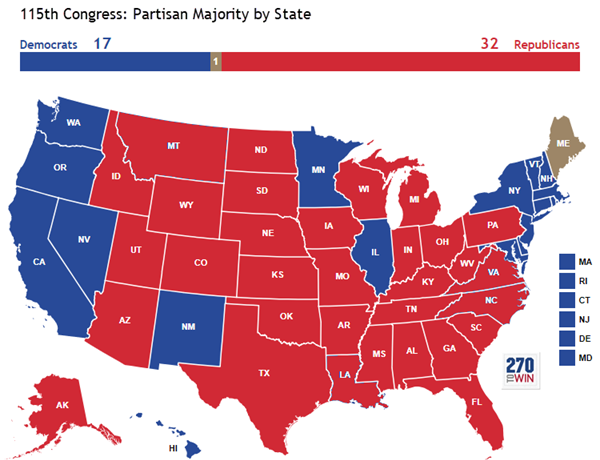 That's nice info, but who cares?  The count would come into play if a presidential election ended with no candidate reaching 270 electoral votes. In that case, the House would select the president, with each state receiving one vote. Note that should this occur with the 2020 election, it is the House elected in November, 2020 that would take the vote. The partisan distribution by state could be totally different after the next election, of course.

Here's the data in a Google Sheet.