The special election for Pennsylvania's 18th district is today. The winner, Republican Rick Saccone or Democrat Conor Lamb, will complete the term of Republican Tim Murphy who resigned last fall. This article, from FiveThirtyEight, does a very nice job of previewing the election, along with what to watch for as the results come in tonight. Polls are open until 8PM ET. 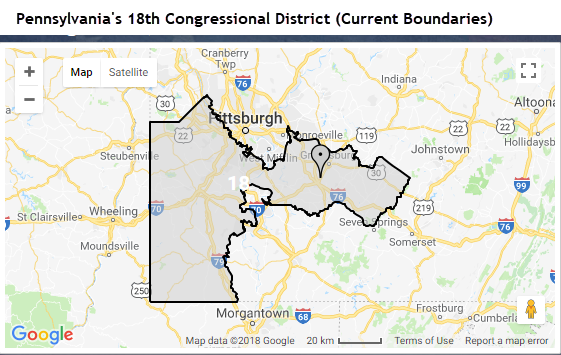 Recent polling has Lamb slightly ahead in what has been a solid Republican district in recent years. President Trump won the district by about 20 points in 2016 and Murphy's re-election that year was uncontested. Democrats have consistently outperformed the presidential results in the congressional special elections held during the Trump presidency. However, Republicans have held all five* seats in the House. Democrats did pick up a Senate seat in Alabama. 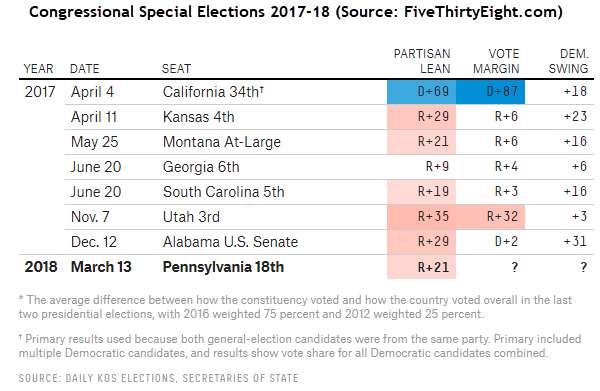 Seen as another referendum on the Trump presidency, both parties are throwing a lot of money at the special election. While that's good for Pittsburgh-area media companies, this district will not exist in its current form next year. As part of a court-ordered redistricting, a large portion of the current 18th will be in the redrawn, safely Republican, PA-14 this November. As a result, if the Democrat Lamb wins today, he's most likely to run in the new PA-17 against 'incumbent' Republican Keith Rothfus. Even if the Republican Saccone loses, he could keep the campaign together to try again in the hospitable PA-14 this fall.

The Pennsylvania 18th District is one of four current vacancies in the U.S. House. The other three:

Candidates that earn any pledged delegates in Iowa will make the stage, with an alternate polling and donor path also available.

Vermont to follow Saturday; both states hold their primaries on Super Tuesday, March 3

While the nominee will be someone else, the seat being vacated by the retiring Sen. Mike Enzi is safely Republican.

The New Jersey Senator had been polling 2-3% nationally; missed the cut for Tuesday's debate

9th in our series: Idaho last voted Democratic in a presidential election back in 1964. Little reason to think that will change in 2020