The Census Bureau released its annual national and state population estimates on Wednesday, noting that Idaho was the nation's fastest growing state for the year ending July 1, 2017. Election Data Services has extrapolated population growth from 2010-17 through to 2020, when the next Census will take place.

At this point, Texas and Florida look to be the big winners, gaining 3 and 2 electoral votes, respectively. Arizona, Colorado, North Carolina and Oregon will gain one each. As the number of electoral votes is fixed, these 9 increased votes must come from somewhere else. The current projection is that Alabama, Illinois, Michigan, Minnesota, New York, Ohio, Pennsylvania, Rhode Island and West Virginia are on track to lose one each. This projection is virtually unchanged from late 2016. The only difference is that Illinois, as opposed to Texas, would be allocated the final congressional district.

Of course, much can change between now and 2020. For example, hurricane Maria devastated Puerto Rico this summer - after the July 1 estimate date - leading to an outward migration of those residents to Florida. It is unknown how many of those will return to the island when life gets back to normal there.

We've created interactive maps of the last five presidential elections using the projected 2024 map. There's little change from 2016, where Donald Trump would win two more electoral votes with the 2024 map. However, looking back to 2000, George Bush would have won 19 more electoral votes, giving him a wider 290-248 victory over Al Gore. That said, Florida would still have made the difference. The Sunshine State is projected to have 31 electoral votes in 2024, vs. 25 in 2000. 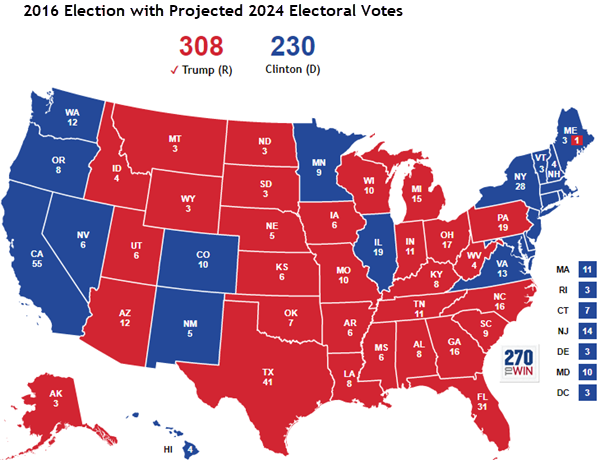 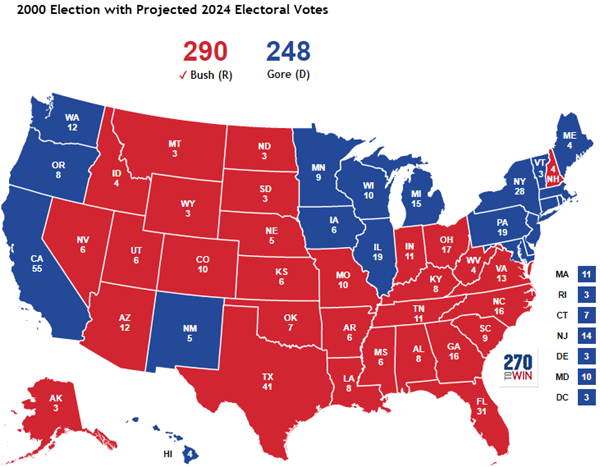