A non-partisan primary was held on April 18th. Since no candidate achieved 50%, the top-two have advanced to today's runoff. Polling shows an extremely tight race between Democrat Jon Ossoff and Republican Karen Handel. Ossoff has a 1.4% lead in the 270toWin Polling Average. However, the most recent polls show it may be even closer than that. A new poll out overnight from Landmark Communications showed the race tied. 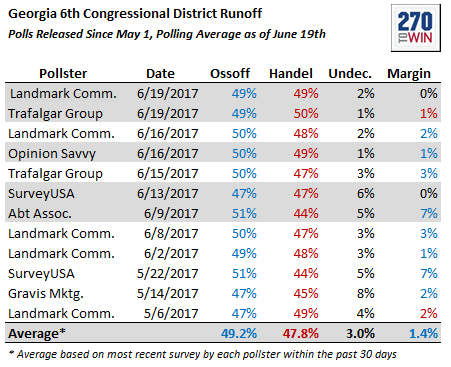 More than 140,000 people have voted early in this election, 25% of the district's registered voters. This includes over 36,000 who did not vote in the April primary.

Today's election fills the seat previously held by Mick Mulvaney, now Director of the Office of Management and Budget. Republican Ralph Norman faces off against Democrat Archie Parnell. Several 3rd party candidates are also on the ballot. Democrats held this seat for over 125 years until Mulvaney was elected in 2010. He won reelection by 20 points in 2016, similar to Price's margin in Georgia. However, Trump won here by over 18%, a larger spread than Mitt Romney in 2012. As a result, the race here hasn't received nearly the same level of attention as the battle in Georgia.

There's been little polling here. Democrats don't expect to win the race, but, as the Wall Street Journal reports, "they are hoping to learn important lessons about what motivates African-American turnout in the Trump era. The Democratic Congressional Campaign Committee is conducting a series of tests to determine what anti-Trump messages work best to motivate black voters to vote for Democratic candidates ahead of the 2018 midterm elections."

There are currently four vacancies in the House of Representatives, where Republicans have a 238 to 193 majority. Democrat Jimmy Gomez won a recent special election in California's 34th district, while Republican Greg Gianforte won the election for Montana's at-large district. Both are expected to be sworn-in this month, bringing the total to 239-194. 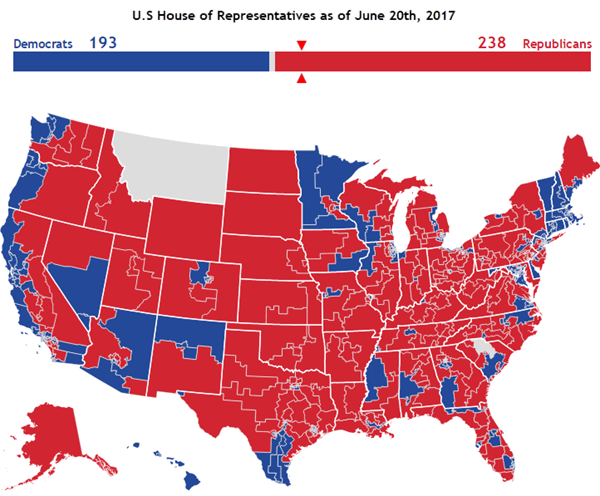 Today's special elections will fill the remaining two vacancies. All 435 seats will be contested in the 2018 Midterm Elections. Create your own forecast with the Interactive 2018 House Map.