A week out from the New York Republican primary, Donald Trump has a commanding lead in the statewide polls. The 270toWin New York Average has him a few points above 50%, with John Kasich and Ted Cruz nearly tied at about 20% each.

As it turns out, those two numbers -- 20% and 50% -- are quite important when looking at how the state allocates its 95 delegates to the Republican Convention. Whether looking at the statewide vote, or any of the states's 27 congressional districts, 20% is the minimum threshold needed to receive any delegates, while exceeding 50% gets a candidate all of them.

Statewide Vote: 14 delegates will be allocated based on the primary results across the state. If a candidate receives greater than 50%, as Trump seems positioned to do, he receives all 14. That is also going to be the case if Trump doesn't reach 50% but is the only candidate to receive 20%. As a practical matter, with only three candidates set to receive almost all the vote, this 2nd set of circumstances is unlikely to occur. If neither Kasich or Cruz reach 20%, Trump should easily meet the 50% threshold. Therefore, if Trump doesn't exceed 50%, the 14 delegates will be proportionately split between any of the candidates that reach the 20% minimum. 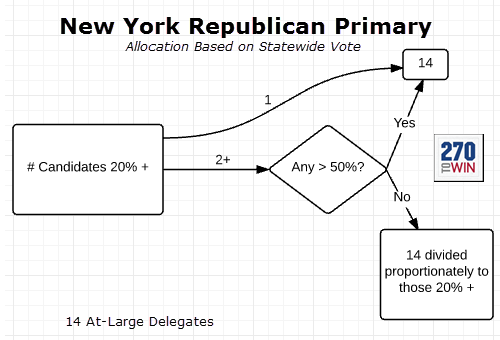 Congressional District Vote: Each congressional district will allocate three delegates. As with the statewide vote, a victory with >50% of the vote or where only one candidate reaches 20% makes it winner take all for those three delegates. Otherwise, the candidate with the most votes gets two delegates, the candidate in 2nd place receives one. We've not seen polling that divides up the electorate by region or district, but one would suspect that if Trump ends up in the 55% range statewide, he would exceed 50% in some, but not all of the state's 27 congressional districts. In that scenario, he'd likely end up winning somewhere around 80 of the state's 95 total delegates. 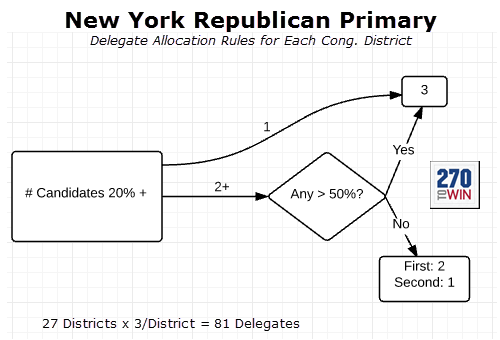 Make your own projection for New York and all the remaining Republican primaries using our interactive delegate calculator.