Hillary Clinton pushed past 1,000 delegates after a Super Tuesday performance that had her easily winning 6 of eleven Democratic contests. As expected, Massachusetts was tight; Clinton prevailed there for her 7th win. The other 4 states were taken by Bernie Sanders, as he won the caucus states of Colorado and Minnesota as well as Oklahoma and his home state of Vermont.  While the Vermont allocation is small, Clinton was likely held under 15%, meaning she will receive none of the state's delegates.

Here's how the delegate count looks as of this morning; some changes are likely. Much of Clinton's overall delegate lead owes to the commitment of superdelegates; party insiders whose vote is independent of the primary and caucus contests. 2,382 (or 2,383 - it is a bit unclear) delegates are needed to win the nomination. 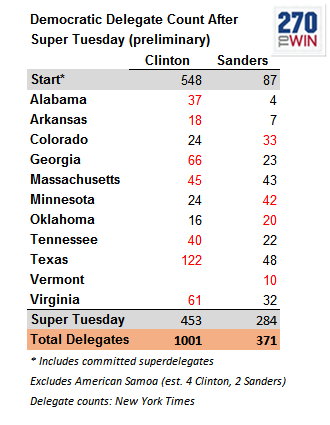 The info above is sourced from the New York Times. The next Democratic contests are this Saturday, with a primary in Louisiana and caucuses in Kansas and Nebraska. The Maine Democratic caucus is Sunday afternoon, with a debate that night in Flint, Michigan, moderated by CNN.