Donald Trump looks poised to win seven of the eight Super Tuesday states where recent polling is available, with Ted Cruz the favorite to win Texas, home to the largest delegate prize. Marco Rubio has the most consistent support across the states and that should be good enough for a 2nd or 3rd place everywhere. 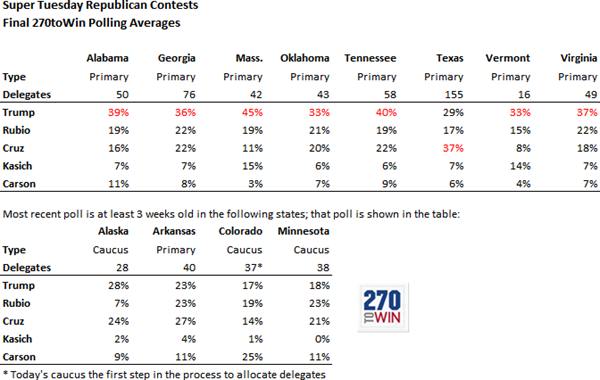 The most recent Arkansas poll is from early February. It is unfortunate that there hasn't been any polling since, as this could end up being the day's most competitive primary. No recent polling is available in the caucus states.

Delegate allocation is somewhat proportional in all the Super Tuesday states, with many states offering delegates based both on the statewide result and the result within each Congressional District. As a result, while Trump is likely to win the most delegates today, Rubio and Cruz will get their share.