Four contests are in the books; Hillary Clinton leads the delegate count 91-65 in those; she has a much larger lead of 544-85 when superdelegates are included. 2,382 delegates are needed to secure the nomination.

Super Tuesday is less than two days out; over 20% of Democratic delegates will be up for grabs that day. Here's a very quick update on the polling in each state. Democratic primaries generally follow the same proportional allocation formula, allocating some statewide, some by Congressional District, with a 15% minimum threshold. As a result, except perhaps for Vermont, both Clinton and Sanders will likely earn some delegates in each contest. 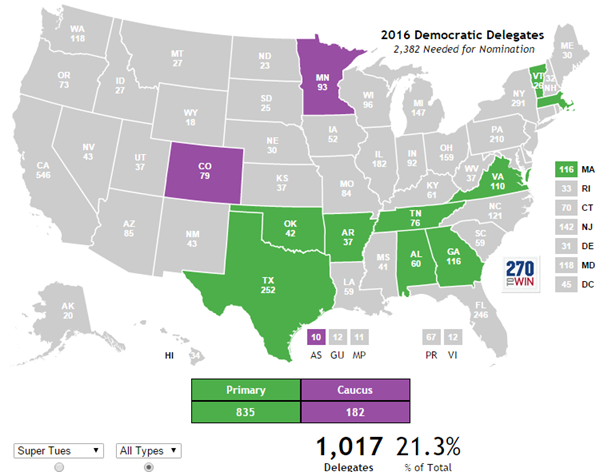 Massachusetts (Primary, 116): Neighbor state to Sanders home; if polling is correct this will likely be the closest Democratic battle on Super Tuesday (Toss-up)

Oklahoma (Primary, 42): The most recent poll had Clinton up just two, while others give her a much larger lead (Leans Clinton)

Vermont (Primary, 26): No contest here; Sanders leads his home state by about 70 points; may keep Clinton under 15% and win all the state's delegates (Solid Sanders)

Virginia (Primary, 110): The polls are a bit varied, but Clinton leads by at least 12 points; average is almost 20 points (Likely Clinton)