Use this link for other 2022 election results by office or state.

27 states will hold elections for Secretary of State. Duties vary, but in many states the office is responsible for the administration of elections. Given the highly-charged environment that emerged out of the 2020 presidential election, these races have taken on increased visibility in 2022.

As the Washington Post notes, "Former president Donald Trump and his allies have succeeded in boosting 2020 election deniers as candidates this primary season, and in many states, they’ve won the Republican nomination. That means, by next year, election deniers could be in charge of their states’ elections, including in key swing states for the 2024 presidential race."

According to Louis Jacobson, writing for Sabato's Crystal Ball, there are eleven competitive Secretary of State elections this November. We've listed those below. States are ordered by number of 2024 electoral votes. Alternately, select a state in the alphabetized drop down menu.

Ratings are by Louis Jacobson; a map of all of them is at the bottom of the article. Poll closing hours shown in Eastern Time (ET).

Our list begins with perhaps the most recognizable Secretary to emerge from 2020. Republican Brad Raffensperger resisted Trump's call to find him the 11,780 votes he needed to win the state. Raffensperger defeated the former president's endorsed candidate to win renomination. He meets Democratic state Rep. Bee Nguyen. Also on the ballot is Libertarian Ted Metz. If his presence keeps any candidate from getting a majority of the vote, the top two finishers will have a runoff on December 6.

The incumbent Democrat is being challenged by Trump-endorsed Republican Kristina Karamo, who has not held political office. Karamo rose to prominence when, as a 2020 poll watcher in Detroit, she loudly complained of voter fraud, catching the attention of conservative media. She' still at it, having recently filed a lawsuit regarding voting practices in Detroit around this year's election.

This is a special election to complete the final two years of the term. Hobbs was appointed by Gov. Jay Inslee after the elected incumbent, Republican Kim Wyman took a job in the Biden administration. Despite the political lean of the state, Hobbs is actually the first Democratic Secretary in over 50 years. Hobbs and independent Julie Anderson advanced from the state's top two special primary. Republicans were shut out as three of them each finished with 10-12% in the primary, just behind Anderson's 13%. To rectify that, Republican state Rep. Brad Klippert is running a write-in campaign.

Trump-endorsed Republican state Rep. Mark Finchem is one of the more prominent election deniers nominated. He will meet Adrian Fontes, the former county recorder for Maricopa County. The Secretary of State is first in the line of succession as there is no lieutenant governor in Arizona.1 1Proposition 131, on the ballot this year, would create a lieutenant governor position If it passes, the governor and lieutenant would run as a two-person ticket beginning with the next gubernatorial election in 2026.

Calling the 2020 election a scam, businessman Diego Morales defeated the establishment-favored incumbent in the GOP primary. While Morales has the advantage of running in a solidly red state, he does bring some background issues to the race. An early October poll showed Democratic nominee Destiny Scott Wells leading by 36% to 32%.

Republicans nominated an establishment candidate, Jefferson County clerk Pam Anderson over a more Trump-aligned option. That keeps this race on the competitive radar, although Democratic incumbent Jena Griswold is at least a slight favorite.

The incumbent Democrat is being challenged by attorney Kim Crockett, who has called the 2020 election rigged.

La Follette was first elected in 1974. He unsuccessfully ran for Lt. Governor in 1978. In 1982, he was again elected Secretary of State and has served in that role ever since.

Wisconsin is one of just 14 states where the Secretary of State doesn't have authority over elections. That is currently handled by the Wisconsin Elections Commission. Republicans may make an effort to change that should their nominee, state Rep. Amy Loudenback prevail.

Pate served one term after being elected in 1994. He won the office again in 2014 and was reelected in 2018. Pate has said the 2020 election was legitimate and that he disagrees with GOP candidates in other states who have taken a different approach. Of course, he oversees a state Trump won fairly easily, so has not been under a lot of pressure to deny the outcome. That red lean of the state also puts him in a good position against Democratic nominee Joel Miller.

Republican nominee Jim Marchant sued to overturn the result of his 2020 congressional election loss. He has since organized the 'America First Secretary of State Coalition', which the New York Times characterizes as " a group of hard-right candidates who have called for eliminating mail voting, using only paper ballots, returning to a single day of voting and giving partisan poll watchers unfettered access.” The Democratic nominee is Cisco Aguilar, a onetime aide to the late Sen. Harry Reid.

The Republican nominee is the party's Hispanic political director, Audrey Trujillo. This is another election that centers around election integrity, with Trujillo suggesting that Donald Trump won the 2020 election. 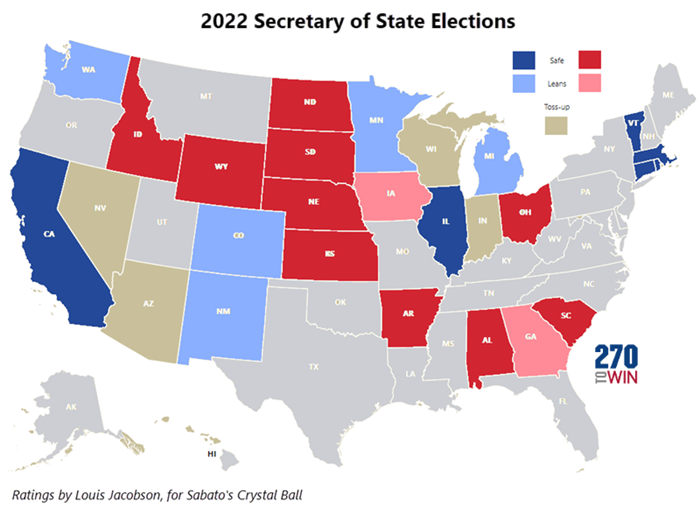