Citing a sour political environment for Democrats, Cook Political on Friday shifted eight gubernatorial races toward the GOP.  A ninth race was rerated in favor of Democrats. After two other changes earlier in the week, the forecaster has now updated its outlook on 11 of the 36 gubernatorial elections to be held in 2022.

Michigan, Nevada, and Wisconsin were moved from Leans Democratic to Toss-up. Of these races, Cook cited Wisconsin Gov. Tony Evers (D) as "probably the most endangered".

The lone race moving in the other direction is in New York, which moves from Likely to Safe Democratic.

Earlier in the week, Massachusetts was moved from Safe Republican to Leans Democratic, as GOP Gov. Charlie Baker announced he wouldn't seek a third term. Cook notes this rating may be transitional "until all the primary contours become clearer, but it seems destined to end up in Likely or Solid Democrat very soon." Georgia was moved from Leans Republican to Toss-up, after 2018 Democratic nominee Stacey Abrams entered the race.

The Cook map with these changes is below. Select it for an interactive version to create and share your own 2022 gubernatorial forecast. 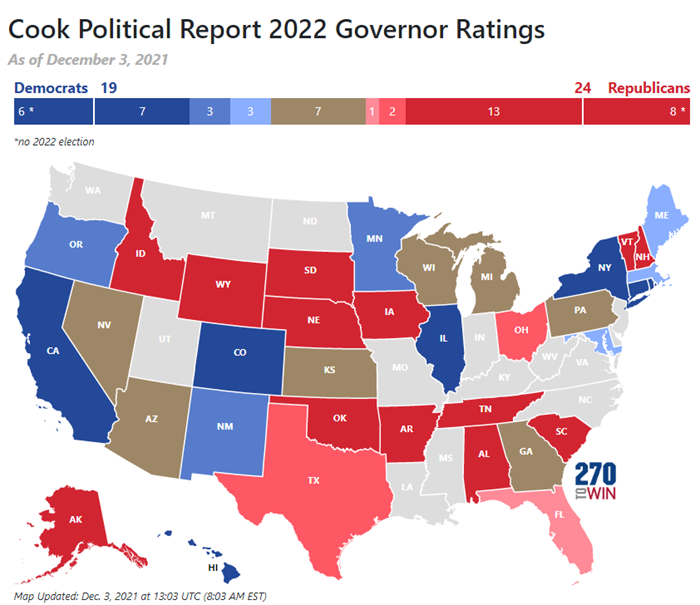