A new Monmouth University poll shows a dead heat in the Virginia gubernatorial race. Democrat Terry McAuliffe and Republican Glenn Youngkin are tied at 46% each among registered voters. The result is an improvement for Youngkin; he had trailed by five points in last month's Monmouth survey.

Using its electoral models, Monmouth says that "a range of reasonable outcomes" is a race decided by 3% or less in either direction. That is reflected in the 'Range' columns in the table below. 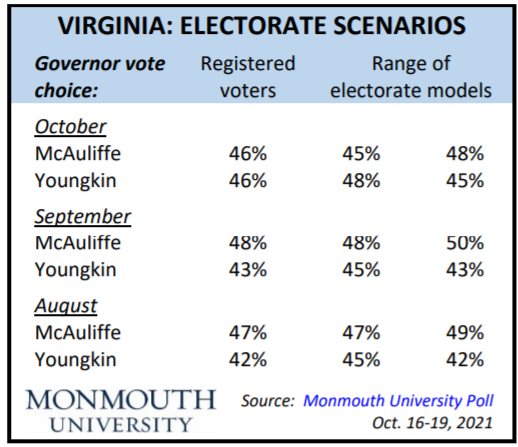 Monmouth surveyed 1,005 registered voters in the state. The margin of error is 3.1%.

From the survey release: "The biggest swing in support from Monmouth’s last poll comes from independent voters, registering a 48% to 39% lead for Youngkin now compared with a 37% to 46% deficit in September. Youngkin has also cut into McAuliffe’s advantage with women voters. The Democrat currently has a narrow edge among women (47% to 43%), down from a sizable 14-point lead last month (52% to 38%).

Youngkin has increased his support in the reddest part of the commonwealth, western Virginia, where he currently leads McAuliffe by 66% to 27% (up from 58% to 34% in September). At the same time, McAuliffe has slipped slightly in heavily-blue Northern Virginia. He leads there by 58% to 34%. This is down only slightly from his 58% to 29% lead last month."

The Real Clear Politics average for the race is currently McAuliffe +1.8%.

Early voting is currently underway for the November 2 election.

Pending redistricting shifts, the decision will make his district a GOP target in the midterm elections.