The NYC Board of Elections has released corrected but still unofficial results of ranked-choice voting. Eric Adams and Kathryn Garcia were the last two remaining, with Adams leading by 51.1% to 48.9%. Garcia prevailed by just 347 votes over Maya Wiley to advance to the head-head round with Adams.

This corrects numbers released in error Tuesday. Those had included about 135,000 test ballots that the Board failed to remove those before calculating the results.

In the end, there was little change in the final outcome. Adams led by about 9 points on Election Day; the final difference was much closer.

As a reminder, no absentee ballots were included in this week's results. These ballots will make up a significant portion of the vote, so the race is far from over.

For more on interpreting these numbers, as well as what happens from here, see the original article below the results table. 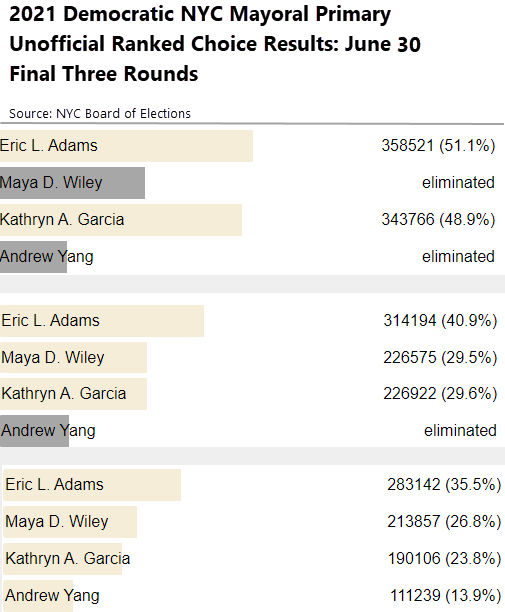 The New York City Board of Elections (BOE) will release preliminary ranked-choice results today for last Tuesday's Democratic mayoral primary.  In results released that night, no candidate in the 13 person field got a majority of the vote. As a result, ranked-choice is being used for the first time to determine a winner.

The BOE is expected to release round-by-round results. In ranked choice voting, the lowest polling candidate is eliminated in each round, with votes reallocated based on the ranking preference of each of his or her voters. The process continues until only two candidates remain, by which point one will have a mathematical majority.

Today's results will be the based on in-person voting that occurred during the early voting period and on Election Day. That is, it is the ranked-choice outcome of the results released last Tuesday.

Today's results will not include any absentee ballots cast in the election. By law, the counting of those did not begin until yesterday. Today is also the deadline for the BOE to receive absentee ballots. Those had to be postmarked by June 22.

The absentee ballot numbers are significant. There were approximately 800,000 early and same-day votes counted on election night. As of June 28, approximately 124,500 Democratic absentee ballots had been returned.  Not all will be valid, but assuming the vast majority are, these will end up comprising 12-13% or so of the total ballots cast.

What will the results tell us?

From the New York Times: Despite the lack of absentee ballots, "the initial ranked-choice tally may still offer an important snapshot of which candidates had the broadest appeal, as well as insight into how voters grouped, or excluded, certain candidates."

The Times goes on to say that

"a range of political observers say the final difference between the top two finishers will likely be closer than Mr. [Eric] Adams’s 9-point lead after the first round of counting.

The campaigns of Ms. [Kathryn] Garcia and Ms. [Maya] Wiley have been busy with calculators, maps of voter-turnout results and various polls hinting at what share of other candidates’ votes will go to each of them and to Mr. Adams.

The data, they have said, suggests the race is tighter than it looks after the initial ballot tally, and that one of them could still win."

Next Tuesday - and weekly thereafter until finalized - the BOE will again go through the ranked choice process. Those releases will include absentee ballots processed to that point.  It is possible that when absentee ballots are counted, the first choice order of the candidates could change. Because of the round-by-round elimination associated with ranked-choice, this could magnify the differences between the results released today and those released in subsequent weeks.