On Wednesday, The Cook Political Report moved the South Carolina Senate election from Leans Republican to Toss-up.  The race has shifted dramatically in the past five months: as recently as early May, the race was seen by Cook and most analysts as safe for incumbent Republican Sen. Lindsey Graham.

Graham is being challenged by Jaime Harrison, former chairman of the South Carolina Democratic Party. Harrison has outraised Graham, enabling him to get his message out. As Cook notes: "Harrison first went up on TV back in April with positive bio spots, and hasn’t gone dark since. That allowed Harrison to set the tenor of the race. And since then, he’s had a series of ads that are very clearly aimed at who they hope will be Graham’s Achilles Heel — white women. In several spots, middle age or senior women talk about how they were once longtime Graham voters but now see that he’s changed on health care and how Harrsion's "values" now more closely reflect their values. Harrison has made this race about character and in other Democratic ads they turn the tables and paint Graham as part of the "swamp," and that seems to be working."

Polls since early August have shown the race exactly tied, or Graham with a one-point lead, well within the margin of error.

The updated Cook Senate map, with this change is below. Click or tap for an interactive version. 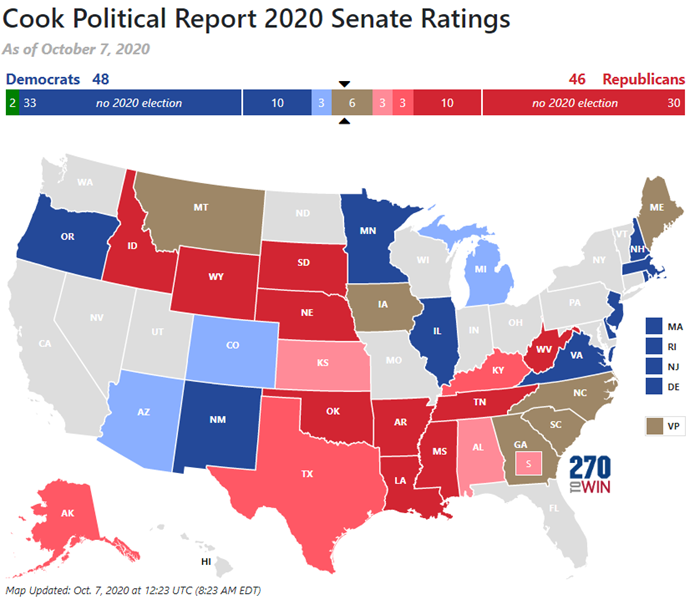 Democrats will choose a nominee to succeed termed-out Ralph Northam; both parties will nominate for seats in the House of Delegates