The Coronavirus Election - an Analysis by Doug Sosnik

Axios reports that "Doug Sosnik, who was the White House political director during President Clinton's successful re-election race, is out with one of his famous political decks, six weeks out from the start of early voting for president."

In the accompanying narrative, Sosnik says, in part,

"Trump changed our politics, but the coronavirus changed our country. Both of these accelerated a new era in American politics. 2020 is not 2016.

In an effort to explain away his abysmal poll numbers, Trump makes the case that today he is in the same position that he was in at this time in 2016, and he still won. The problem with that argument is that it’s a complete misreading of the 2020 election. In 2016, voters faced a choice between two candidates. In a re-election campaign, voters will see it as a referendum on Trump’s presidency – one that will long be remembered as the coronavirus election. At some level Trump grasps that the election is about him, but he mistakenly concludes that he’s an asset, not a liability.

The pandemic’s unprecedented health and economic crises have played out during the most decisive period in the presidential campaign. If history is our guide, the most critical phase of the campaign has already passed. A look back at past presidential campaigns clearly demonstrate that the sitting President’s job approval ratings and the related trendlines at the end of the election year’s second quarter are the best predictors of the election outcome. (See slide 8) By that point voters have begun to lock in on their views on the state of the economy and the direction of the country under the leadership of the sitting President."

Complicating the president's efforts to rebound will be a virus-driven acceleration of the trend toward early and remote voting. Most states, including many battlegrounds, will be voting a month or more out from the election. Sosnik notes that "by the time the final debate is held on October 22nd, over half of the country will likely have already voted." 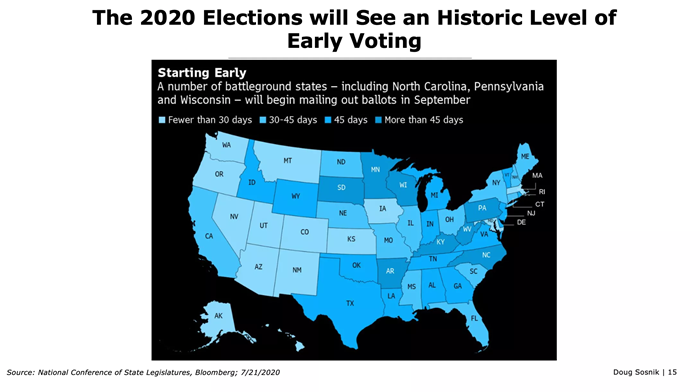 Six days out from the 2020 election, the forecaster has made about 30 changes, mostly in the direction of Democrats

The state last voted Democratic in a presidential election in 1976 but polling this year continues to show a highly competitive race.

Inside Elections Updates Outlook for President, Senate and House
Cook Political Moves Texas to Toss-up in Presidential Race
The Road to 270: Georgia