Freshman GOP Rep. Denver Riggleman was defeated in his bid for renomination at a district party convention Saturday.  He lost to former county supervisor Bob Good, who challenged Riggleman from the right.

While most nominees are chosen in a traditional primary process, Virginia allows district party committees the option to instead choose their nominees at a party convention. The state's regular primaries are scheduled for June 23.

The 5th district is the state's largest by land area, stretching from the exurbs of Washington D.C. southward through the central part of the state to the North Carolina border. Riggleman was elected by 6.5% in 2018 after his predecessor Tom Garrett (R) did not seek reelection. Donald Trump won the district by 11 points in 2016. 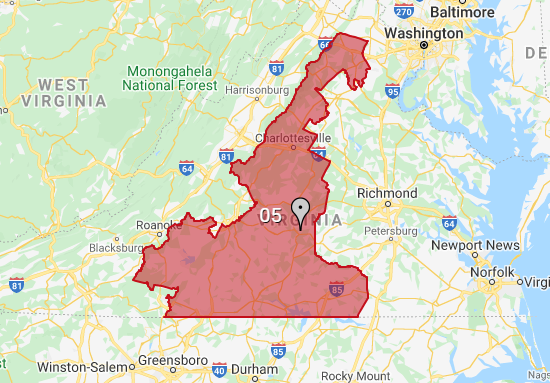 The general election had been seen as Likely Republican, but this nomination may put it more on the competitive radar. Sabato's Crystal Ball is expected to move their rating to Leans Republican.

The Crystal Ball may move #VA05 from Likely R to Leans R, depending on the convention results today. Republicans would still be favored there because of VA-5's trend. In 2017, Gov. Northam did almost 3% better overall than Obama in 2008, but VA-5 got 6% redder. pic.twitter.com/FlwQAAxu8v

Riggleman is the third House member to lose renomination Fellow Republican Steve King (IA-2) and Democrat Dan Lipinski (IL-3) were ousted in traditional primaries earlier this year.  This brings to 39 the total current members retiring from the body at the end of 2020.