The Cook Political Report has updated its rating for the U.S. Senate special election in Georgia.  It moves from Likely to Leans Republican following the entry of credible challengers to Sen. Kelly Loeffler from both parties, further complicated by the unusual structure of this election.

Rep. Doug Collins (GA-9) joined the race on Wednesday, and will challenge Loeffler from the right. On Thursday, Democrats landed one of their top recruits, as Rev. Raphael Warnock announced his bid.  He joins other prominent Democrats in the race, including Matt Lieberman, son of former Connecticut Sen. Joe Lieberman, and Ed Tarver, a US attorney under Barack Obama.

Under Georgia special election law, there are no party primaries. All the above candidates, and any other entrants, will appear on a single ballot on Election Day, November 3. If no candidate gets a majority of the vote, a top-two runoff will be held January 5, 2021.

Georgia House Bill 757, currently under consideration, would change the law to require a primary election. Generally, it has the support of Republicans aligned with Collins and many Democrats.  It is opposed by Gov. Kemp, who appointed Loeffler to the vacancy created by the retirement of Sen. Johnny Isakson at the end of 2019.  Regardless of whether this bill becomes law, it is unlikely to affect this year's race.

The current Cook forecast for the 2020 Senate elections is below.  Click or tap for an interactive version to create and share your own projection. 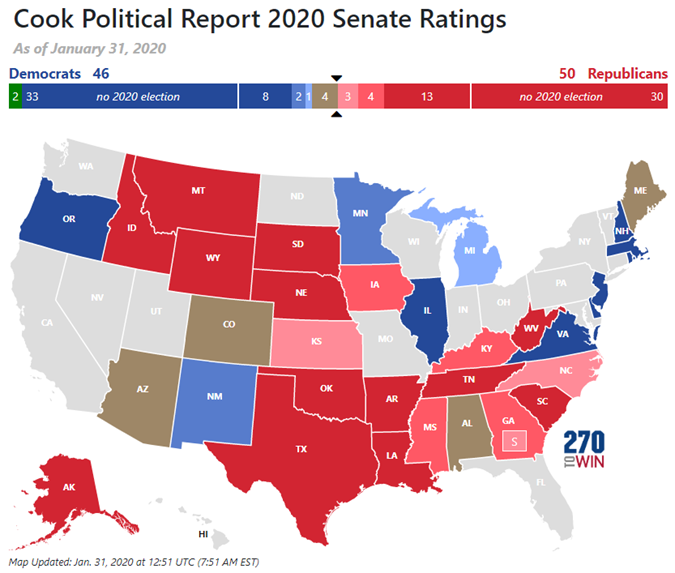