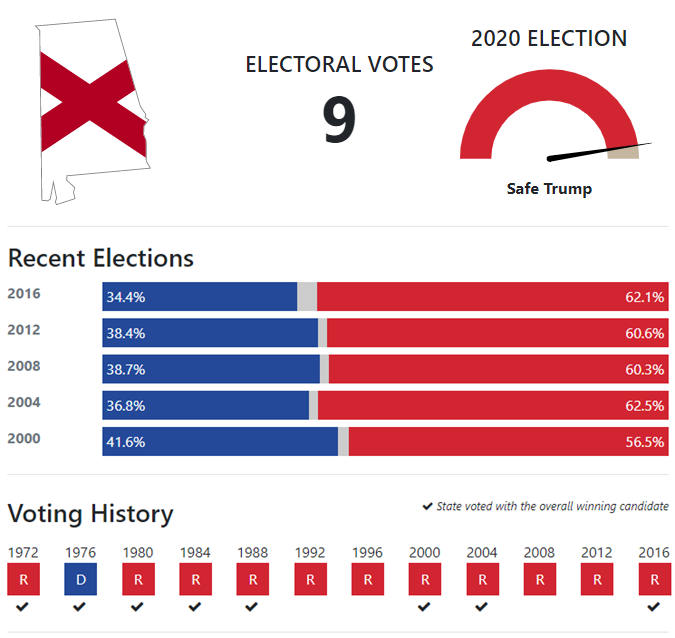 Alabama’s history is reflected in its contemporary voting patterns. The region that once had thousands of slaves is still heavily African American and forms a horizontal strip across the state. In 2016, 12 of the 13 counties that Hillary Clinton won were in this territory. Donald Trump won every other county except one. To understand how the state became the GOP stronghold it is today, we have to go back over 200 years.

In the late 1700s, what we now consider Alabama was split up between Spain and the Georgia. In 1795, Spain relinquished a strip of land to the U.S. that covered part of current-day Mississippi and Alabama. This was called the Mississippi Territory.  The territory expanded in 1804 and again in 1812 as Georgia and then Spain gave up more land. The territory opened to settlers after Andrew Jackson defeated and expropriated Native American land in the Creek War in 1814. Settlers and farmers rushed into the newly available and fertile land. Alabama and Mississippi split in 1817 and two years later, in 1819, Alabama became the 22nd state admitted to the Union.

Thousands of slaves were brought to Alabama to work on plantations in the Black Belt, a region stretching across central Alabama named for its fertile, black soil. Unsurprisingly, white Alabamans opposed the abolition of slavery and the state seceded during the Civil War. By that point, Alabama had over 435,000 slaves, composing 45% of the state’s population.

Following the Civil War, the Republican Party briefly dominated Alabama politics. The 15th Amendment enfranchised recently freed slaves who voted, along with unionists and some poorer white farmers, for Republicans.  In both 1868 and 1872 Alabama voted for Republican (and former Union commanding general) Ulysses S. Grant.

It wasn’t long before Democrats instituted voter suppression and intimidation tactics that would restrict access to the ballot box, primarily affecting blacks and poor whites. The party appealed to white racial unity and, in 1874, won the governorship. This began an era of Democratic state dominance that would last for nearly a century. It also allowed Alabama Democrats to call a Constitutional Convention.

It was the 1901 Constitution, with its goal of “white supremacy and purity of ballot” that crushed Alabama Republicans. The new constitution established poll taxes and educational requirements to restrict access to the ballot box. It worked: Alabama’s vote totals dropped 30% from 150,000 to 100,000 between the 1900 and 1904 elections. And the Democratic margin expanded 27% in those four years. 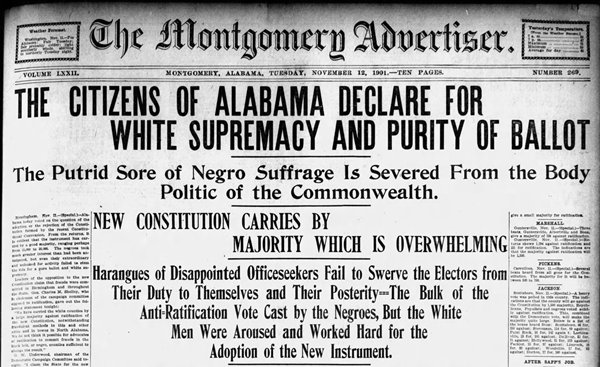 Democrats continued to control Alabama throughout the first half of the 20th Century. The Republican Party found some support with northern Alabama whites and black voters who made it to the ballot box. However, The Great Depression and the New Deal would break down this coalition (Any supporting link?), bringing Democratic dominance to a peak in the 1930s. In the 1936 election, Democrat Franklin Roosevelt beat Republican Alfred Landon 86% to 13%.

The National Democratic Party began to take more liberal stances — the most significant for Alabama being civil rights — that state Democrats opposed. The 1948 election marked a turning point. President Truman was, by the standards of the time, extremely progressive. He supported ending segregation in the army, eliminating poll taxes, and instituting an anti-lynching law.

A breaking point came at the 1948 Democratic national convention, when the party added a civil rights plank to its platform. The Mississippi delegation and half of the Alabama delegation walked out of the convention, created the States’ Rights Party, and nominated South Carolina governor Strom Thurmond as their candidate. In Alabama, Thurmond, who was listed on the ballot as the Democratic nominee, beat Republican Thomas Dewey 80% to 19%.

While Democrats would win Alabama in the following three elections, they would never regain their dominance of the earlier era. Shifting national policies reoriented Alabama and ended the state’s reflexive support of the Democratic Party.

Alabama was at the center of the civil rights movement. It was here that the Montgomery Bus Boycott and the Selma to Montgomery marches happened; where Martin Luther King Jr. wrote his letter from Birmingham jail; where four girls were killed in the Birmingham church bombing; and where Alabama Governor George Wallace stood in the doorway at the University of Alabama to block black students from entering in defiance of a federal court desegregation ruling.

Johnson crushed Goldwater nationally 61% to 38%. In Alabama, though, Goldwater received 69% of the vote,* becoming the first Republican to win the state since 1872. Republicans also flipped five of the state’s eight congressional seats, the first time any Republican in Alabama would win a congressional election in the 20th Century. The Goldwater Landslide ended the era of Post Office Republicans, a mocking nickname for only being able to secure positions (such as postmaster) through federal appointments and patronage.

Alabama would vote for the Republican nominee in every subsequent election except 1968, when it voted for third party candidate and former Alabama Governor George Wallace, and 1976, when it voted for fellow southerner Jimmy Carter.

The Republican takeover began in 1964 and slowly trickled down-ballot. In 1980, the state elected its first Republican U.S. Senator since reconstruction. Republicans retook the majority of U.S. House seats in 1996 and haven’t relinquished the majority since.

In 1986, Guy Hunt became the first Republican governor since 1874. The governorship flipped between parties until 2003, and has been Republican since. Republican legislative power began to grow in the 1990s and by 2010 they had flipped both legislative chambers, giving the party a trifecta. The last statewide executive office, excluding judgeships, won by a Democrat, was for Public Service Commission back in 2008.

Alabama has not had a competitive presidential election since 1980. That year, Georgia’s Jimmy Carter lost Alabama by just 1%. Ronald Reagan carried the state by 22% in 1984. Bill Clinton tightened the margin to 7% in 1992 and 1996, the most recent times that Alabama would be decided by single digits. Since 2004, Alabama has gone to the Republican nominee by 20% or more. Donald Trump’s 28-point victory over Hillary Clinton marks the largest margin since Richard Nixon’s landslide victory in 1972.

Of Alabama’s 67 counties, Clinton won just 13. She won Jefferson County (home to Birmingham and the biggest county in the state), as well as 12 counties that formed a contiguous horizontal strip across the middle of state. These regions have a much higher black population than the rest of the state — the legacy of slavery mentioned earlier — making it friendly Democratic territory. Trump won the rest of the state, including rural counties and the more urban Madison and Mobile Counties.

The Republican dominance doesn’t mean the party is without problems. Governor Robert Bentley resigned in 2017 after he was accused of using state funds to have an affair and a recording of the affair the surfaced. This year, Speaker of the House Mike Hubbard was convicted of 12 felonies and ethics violations.

Perhaps most significantly, Alabama Republicans lost a special U.S. Senate election in 2017. The seat opened after President Trump appointed Senator Jeff Sessions to be his Attorney General.  The seat should have been safely Republican, but the party nominated the controversial former Alabama Supreme Court Judge Roy Moore, leaving the door cracked for Democrats. The month before the election, several women alleged that Moore had made sexual advances towards them when they were underage. Democratic nominee Doug Jones managed to edge out the damaged Moore by 22,000 votes.

The Alabama Democratic Party has had its own share of dysfunction. A battle over control of the state party led to the ousting of the old guard. The controversy, ostensibly about bylaws, but really about the direction and leadership of the Democratic Party, was divisive and racially tinged. (If you are interested, I strongly recommend this three-part series by the popular podcast Reply All on the war for the Democratic Party).

Alabama entered the Union in 1819 with three Electoral College votes. This number steadily rose, reaching a peak of 12 in the 1910s and 1920s. The state lost one elector after the 1930, 1960 and 1970 Censuses, remaining at nine through the 2010 Census. According to population projections, Alabama is on track2 to lose another congressional seat, and therefore another electoral vote, following the 2020 Census.

Regardless of the outcome of the Census, Alabama will still have nine electoral votes in 2020. And they are almost certain to go to President Trump.

1 The Democratic slate of electors in 1964 were unpledged due to the Alabama Democratic Party’s opposition to Lyndon Johnson.

2 The Census Bureau is expected to release its 2019 population update on December 30. Any changes will be reflected on the projected 2024 electoral map.