Amy Klobuchar has qualified for the November Democratic debate. Separately, details have been announced for the Party's December debate, the final one of 2019.

Sen. Klobuchar of Minnesota received 3% in a national Quinnipiac survey this past Thursday, giving her enough qualifying polls to make the November debate stage. She is the 9th candidate to meet both the polling and fundraising requirements. 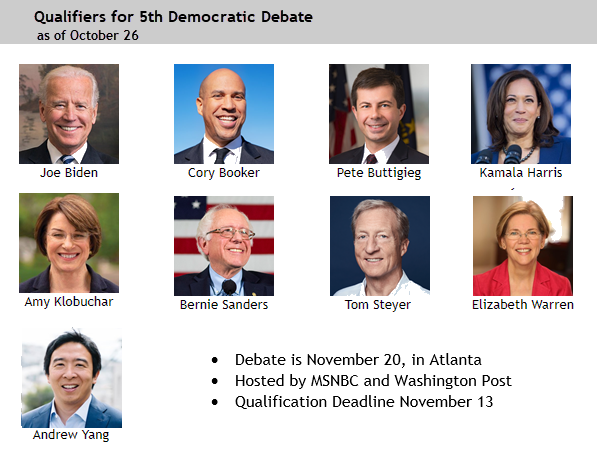 Three additional candidates - all of whom participated in the most recent debate - have met the fundraising requirement, but not the polling one. The deadline is November 13. 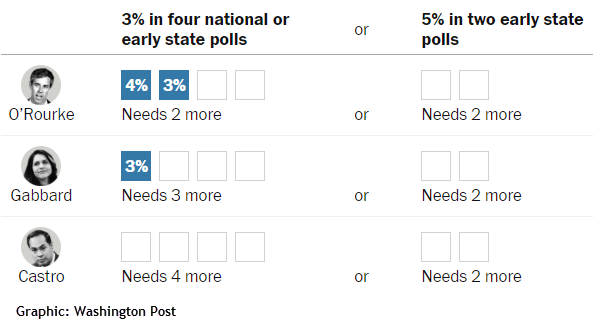 Details have been announced for the final debate of 2019. It will take place on the campus of UCLA and be hosted by Politico and PBS.

The DNC has again tightened the qualifying criteria. Candidates must receive 4% support in four approved national or early voting state polls.  Alternately, they can receive 6% in two approved early state polls. This is up from 3% and 5%, respectively. On the fundraising side, candidates must have contributions from 200,000 unique donors, up from 165,000. There's also a minimum of 800 donors from 20 states or more, up from 600.

At this point, Joe Biden, Elizabeth Warren and Bernie Sanders have qualified, with Pete Buttigieg and Kamala Harris likely to cross the threshold shortly. Candidates will have until December 12 to qualify.