Following the 2018 midterm elections, the number of states with a split U.S. Senate delegation will drop from 14 to just 10 in 2019. This marks the fourth consecutive election with a decline. This is also just one above the historically low value* of nine split delegations set in 1955-56.

The chart below, from a Pew Research study, shows the totals by state for the past fifty years, ending before this year's midterms. After Democrat Doug Jones won a 2017 special election in Alabama, 14 states had a split delegation. 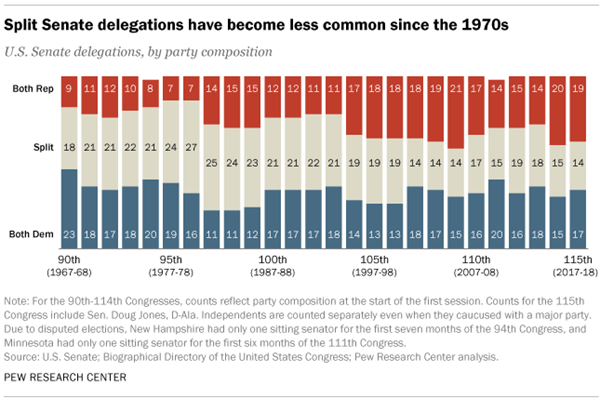 The 2018 midterm elections saw five states move off that list, with one added. Democratic incumbents in Florida, Indiana, Missouri and North Dakota were defeated as was the Republican incumbent in Nevada. All five of those states moved to a single-party delegation. Interestingly, these were the only five incumbents to lose re-election. The open seat in Arizona was a Democratic gain; that will now have one Senator from each party. As a result, in 2019, 22 states will have two Republican Senators and 18 states will have two Democratic Senators. 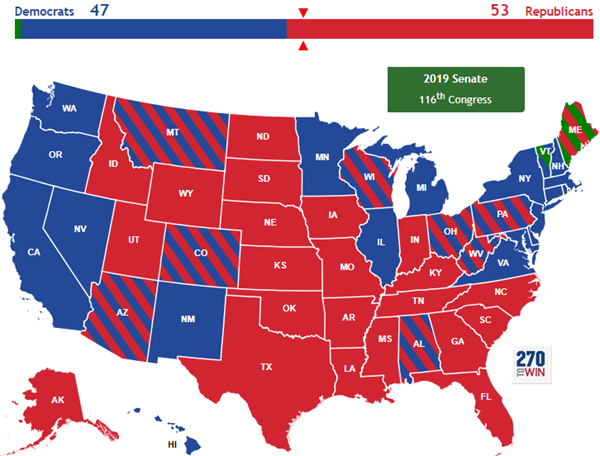 * Since direct election of U.S. Senators began after the passage of the 17th Amendment in 1913. There were 48 states from 1913 until 1959. Independents are counted separately, even if caucusing with a major party.