California's non-partisan election highlights a busy primary Tuesday this week. Also on the calendar, with more traditional primaries, are Alabama, Iowa, Mississippi, Montana, New Jersey, New Mexico and South Dakota. Nominees will be chosen for five Senate and five gubernatorial races across the eight states. California (and New Mexico) have elections for both.

The video below, from the Los Angeles Times, provides an overview of California's top-two primary system. All candidates appear on a single ballot. The top two vote-getters, regardless of party, move on to the general election. The most closely-watched races that might be impacted are three Republican-held congressional districts in Orange County and the state's gubernatorial race.

Each of the three congressional races features two or more viable Democratic candidates. In fact, voters in each of these districts must choose from no fewer than 15 candidates on the ballot. The party's fear is a split vote such that two Republicans advance to November. This would give the GOP automatic victories in one or more races that are winnable by Democrats.

Candidates on the primary ballot in three competitive congressional districts: 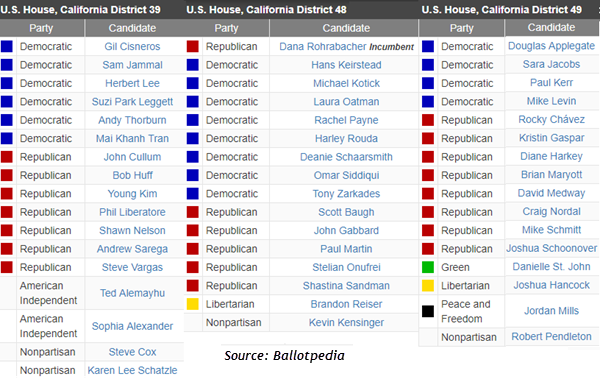 On the other hand, Republicans are concerned that two Democrats will advance to November in the race to replace termed-out Gov. Jerry Brown. The race to watch is that for 2nd place, between Democrat Antonio Villaraigosa, the former Mayor of Los Angeles and Republican businessman John Cox. Democratic Lt. Gov. Gavin Newsom is likely to get the most votes. A Democrat will almost certainly win in November, but having no Republicans on the ballot for a statewide race - the U.S. Senate contest is expected to feature two Democrats - might suppress turnout.

Polls close Tuesday at 11:00 PM Eastern / 8:00 PM Pacific. It is the last of the eight states to close, and almost certainly will be the last to finalize all the results, if 2016 is any guide.

Live Results from the First Special Election of 2023