Al Franken to Resign January 2nd; Minnesota to have Double Senate Election in 2018

Minnesota Sen. Al Franken has set January 2, 2018 as his resignation date. His replacement, Lt. Gov. Tina Smith, will be sworn in the following day. She was appointed to the position by Minnesota Gov. Mark Dayton after Franken announced his intention to resign earlier this month.

When Smith is seated, Minnesota will become just the 6th state to ever have two female Senators serving simultaneously. The other five include California, New Hampshire, Washington, Kansas and Maine. The first three states in that list currently have two women in the Senate.

Smith's appointment is temporary. Minnesota will hold a special election coinciding with the midterm elections next November. The winner will serve the final two years of Franken's term. That seat's next regularly scheduled election is in 2020.

Minnesota's other Senator, Amy Klobuchar, is also up for reelection in 2018. According to an analysis by Sabato's Crystal Ball, this will be the 55th time since 1913 that a state has had a 'double-barrel' Senate election. The analysis shows that in the vast majority of cases, the same party wins both elections. In fact, this has been the case 100% of the time since 1966.

Use our Senate Interactive Map, now updated for Alabama and Minnesota, to create and share your own 2018 Senate election forecast. 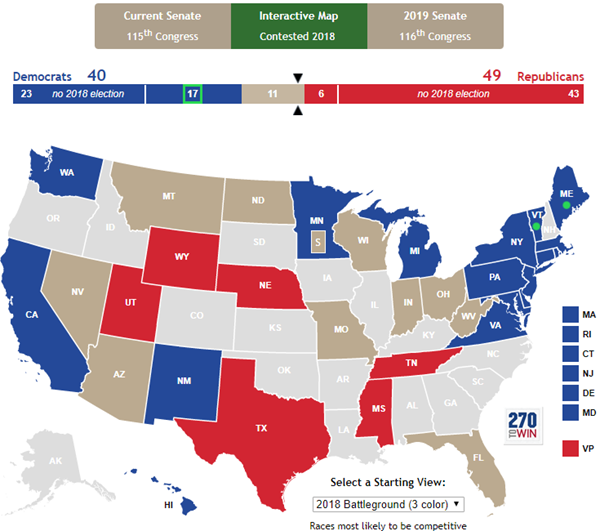