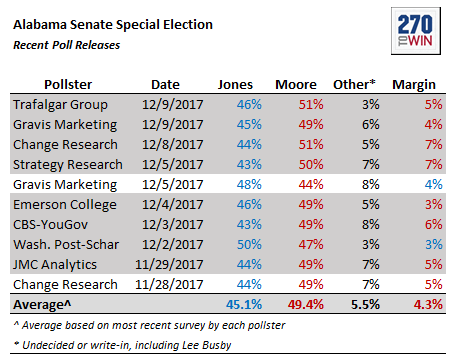 Will the polls prove accurate? The big question is whether turnout on Tuesday matches the pollsters' assumptions about who will actually vote. While this is always an issue, it is particularly challenging in this case - a special election that is not being held off-cycle in a state with no early voting. The Times Daily notes that "the Alabama Secretary of State’s Office last week said it estimates a 20 percent voter turnout on Tuesday. That’s higher than the August primary’s 15 percent and the GOP runoff’s 18 percent. Turnout for the 2016 General Election was 62 percent."