Ossoff Leads by 7 in New Poll for Georgia Special Election

Democrat Jon Ossoff has a 7 point lead over Republican Karen Handel in a new SurveyUSA poll of 549 likely voters in Georgia's 6th Congressional District. Ossoff is at 51%, Handel 44%. The runoff election is four weeks from Tuesday (June 20th). 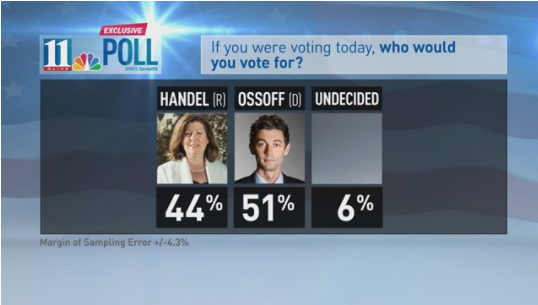 While the 7 point spread is the largest we have seen for this election, The pollster cautions that the result is “close enough in a low-turnout, stand-alone runoff to be anyone’s call, though clearly Ossoff is in a better position than Handel.”