Donald J. Trump was confirmed as president-elect today by members of the Electoral College, winning at least 304 electoral votes. Texas put Trump over the top as it cast its vote after 5PM ET today. 304 is likely to be Trump's final number, as the three states yet to vote - California, Nevada and Hawaii - were won by Hillary Clinton on Election Day. Should those electors all vote as pledged, Clinton will end up with 228 votes. 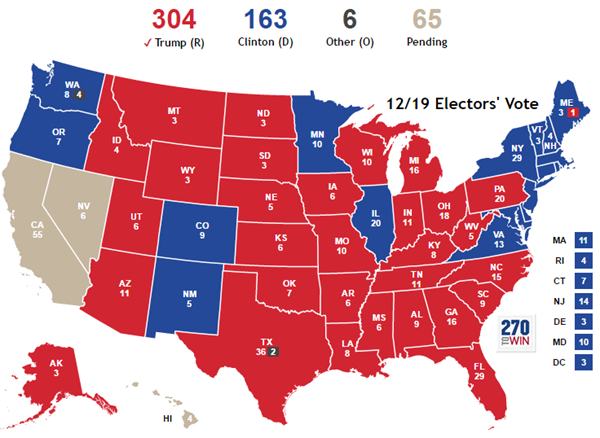 In the end, there wasn't a lot of drama in the vote. There were 6 faithless electors, however, including 4 in Washington and two in Texas. While a small number, this is the highest number of faithless electors for president since the 19th century. There were attempts by electors in Colorado, Maine and Minnesota to cast faithless votes, but these were disallowed.