Twelve seats will have gubernatorial elections in 2016, including one special election in Oregon. We've updated the interactive map with the latest ratings changes from Sabato's Crystal Ball.

Note the competitiveness of the races in Vermont and West Virginia, in stark contrast to the presidential race, where we may see two of the largest margins of victory for Clinton and Trump, respectively, this November. The article discussing the changes dives into some of the history behind those seeming contradictions.

Republicans hold the governor's office in 31 states, Democrats 18. Alaska's governor is an independent. Eight of the twelve seats up for election this year are held by Democrats, including five of the seven competitive ones. Seven of the twelve incumbents are not standing for reelection, including Indiana governor Mike Pence, now Donald Trump's running mate.

Here's how the map currently looks. Click it for an interactive version to create your own 2016 forecast. 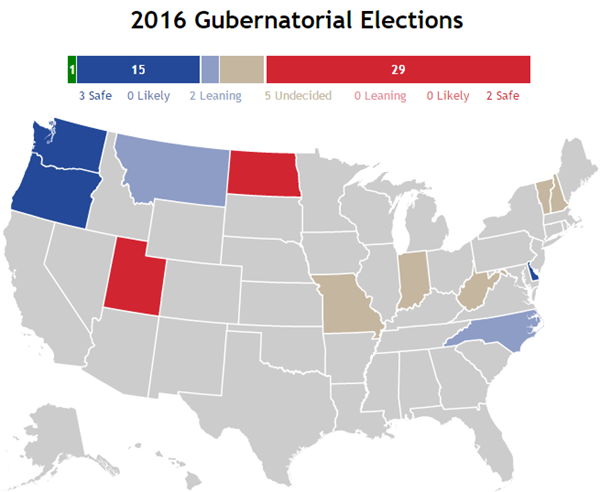