Three national polls out on the eve of the Republican convention find Hillary Clinton with a lead of four to seven points over Donald Trump.

Looking at these current results vs. late June polls from the same pollsters finds the largest shift in the ABC/Washington Post poll, which showed Clinton with a 12 point lead last month. There was no change in the NBC poll's five point spread, while CNN showed Clinton gaining two points on Trump. 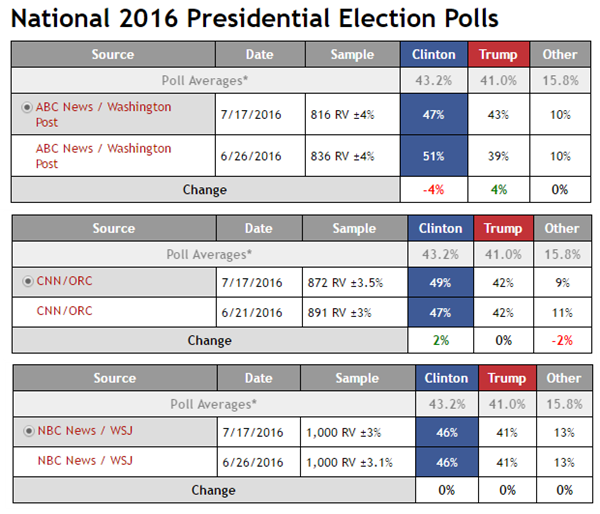 Each pollster also did a heat that included Libertarian Gary Johnson and Green Jill Stein. Both continue to attract significiant interest for 3rd party candidates, with Gary Johnson getting as much as 13% support. The addition of these two did not significantly affect the overall spread between Clinton and Trump, indicating they are impacting the presumptive Democratic and Republican nominees roughly equally.

For those interested, we will be adding results for Johnson and Stein to our polling pages within the next few days.