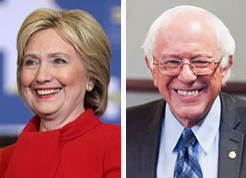 Bernie Sanders is expected to endorse Hillary Clinton at a rally today in Portsmouth, New Hampshire. Per NBC News, "...the joint event with Sanders, an unexpectedly fierce challenger who tried to stage a hostile takeover of the Democratic Party, will carry special emotion and significance. The event helps fuse two wings of the Democratic party together that, despite their real differences, seem to be closer together than their counterparts across the aisle."

The rally is scheduled to begin at 11:00AM Eastern Time.

Clinton's expected general election opponent, Donald Trump, took to Twitter with his thoughts on the endorsement:

Bernie Sanders, who has lost most of his leverage, has totally sold out to Crooked Hillary Clinton. He will endorse her today - fans angry!