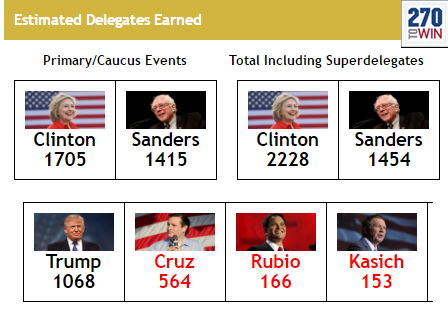 Hillary Clinton starts the day 155 delegates from the 2,383 she needs to clinch the Democratic nomination, while Donald Trump, now the presumptive Republican nominee, needs 169 to officially reach the magic number of 1,237 delegates. Neither can reach the required total today with the pledged delegates available.

Democratic Primary:  There are 29 pledged delegates available in the Democratic West Virginia primary. Sanders leads the limited polling by 6 points. As with all Democratic contests, the delegates will be awarded proportionately based partially on the statewide result, partially on the result within each congressional district. Regardless of the outcome today, Clinton is likely to clinch the nomination on June 7th. Six states, including California with 475 pledged delegates, vote that day.

Republican Primaries: 70 delegates are available today. Nebraska has 36 delegates, winner take all. There has been no polling here, but, with no competition, little reason to think anyone other than Trump will win. Trump has a commanding lead in West Virginia. He should win most or all of the state's 34 delegates, depsite the convoluted way they are awarded. June 7th is also the most likely date for Trump to officially seal the nomination.

Bernie Sanders led in the final polling average. When the vote is finalized 36 delegates will be allocated proportionately to those meeting the 15% viability threshold.

These states were flipped by Donald Trump in 2016, each voting for a Republican presidential nominee for the first time in a generation

Alabama moves to likely Republican, while Colorado moves from tossup to leans Democratic

The seat has been vacant since former Rep. Sean Duffy resigned in September

Includes polls from three of the four states with the largest delegate pools available that day.