A new Quinnipiac poll of Florida, Ohio and Pennsylvania finds a competitive general election battle in those states between Donald Trump and either Hillary Clinton or Bernie Sanders. 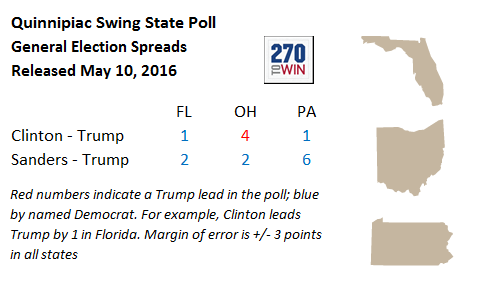 This poll shows a closer race in Florida and Pennsylvania than other recent 2016 election polls; Ohio remains close. This is the first set of polls in these traditional swing states since Trump became the presumptive Republican nominee. Future polls will tell us whether this result indicates a growing acceptance of Trump as Republican standard-bearer.

Note: The image above has been corrected from an earlier version. The initial version said Clinton - Sanders when it should have been Sanders - Trump.