Battle For Senate Control: State Of The Race Mid-April

After the presidential election, the battle for control of the Senate will likely be the largest political story of this election season. Republicans are currently in the majority with 54 seats, Democrats control 46. Depending on who wins the White House, Democrats will need to gain either 4 or 5 seats to take the gavel from Majority Leader Mitch McConnell.

We've summarized the current state of the race in the table below. Use our 2016 interactive Senate map to review the current Senate, make an election forecast, and then see the 2017 Senate based on your prediction. 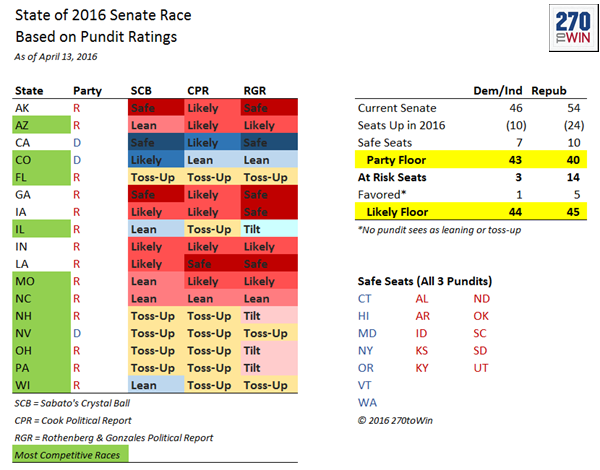 The left part of the table shows the 17 potentially competitive races in 2016; Iowa has been added to the list since our last look in February. these are the seats that will determine control of the Senate. For a race to be in this list, at least one of three professional pundits needed to see the race as at least somewhat competitive. The other 17 seats were seen as safe for the incumbent party by all three; these are listed to the bottom right. The most competitive races are highlighted in green. These are races where at least one pro sees the race as leaning or toss-up.

In the top right, we've summarized what it all means. More than 70% (24 of 34) of the seats to be contested this year are currently held by Republicans, with the composition of safe seats much closer to 50-50. This puts the Democratic floor at 43 seats, Republicans at 40 or, put another way, 3 Democratic seats are at risk, while 14 Republican ones are in play.

Six of the races are seen as likely (or even safe) by the pros. These are less likely to end up as competitive. If we adjust for that, we end up with a 'Likely' floor of 45 for Republicans, 44 for Democrats, with the remaining 11 seats likely to decide control of the Senate.