Marco Rubio's five Alaska delegates were returned to him this week, the result of a request granted by the State Republican Party. Donald Trump lost three of those, Ted Cruz two.

Per Alaska rules, delegates earned by those who withdraw from the race are redistributed based on the state's proportional allocation method. In his letter to the Party, Rubio argued that he had suspended his campaign, but had not withdrawn from the race.

While small in number, any loss of delegates by frontrunner Donald Trump increases the likelihood that he will not receive the necessary 1,237 before the July Convention in Cleveland. Trump needs about 53% of the remaining delegates to win the nomination. 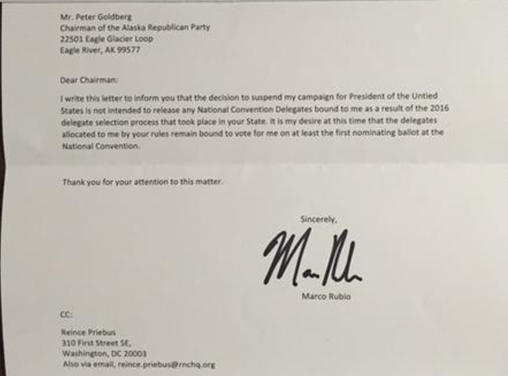 This is another reason why campaigns are usually suspended and not formally ended.