Tuesday is shaping up as a key day in the 2016 presidential race. Five states, including four of the top ten delegate prizes in each party, will be voting. On the Republican side, the date marks the first date when states have the option for winner take all allocation of delegates.

Trump has 460 delegates, 37% of the 1,237 needed to secure the Republican nomination. This weekend saw Rubio, Cruz and Kasich earn about 10 delegates each, while Trump netted only one. Trump leads by 90 over Cruz heading into Tuesday, where approximately 360 delegates are up for grabs in the five states (plus nine in Northern Mariana Islands Convention)

On the Democratic side, Hillary Clinton has won about 58% of the delegates in contests thus far, but holds a commanding lead when committed superdelegates are included. Assuming she holds those superdelegates (they can change their mind), she now has more than 50% of the 2,383 needed for the nomination. Around 790 delegates (including superdelegates) are associated with Tuesday's events.

A recap of where things currently stand for each contest follows, including a discussion of the delegate allocation procedure as we understand it. The poll closing times are believed accurate, but you should not rely on them to vote. Click/tap a state for more details. 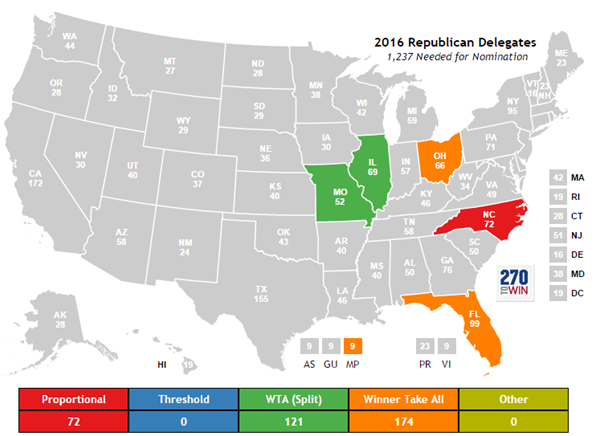 Florida The big prize on March 15 with 99 winner take all delegates. There has been a lot of polling over the past week, and Trump leads it all, but there's an interesting stratification here. Some of the polls show a competitive battle, with Rubio about 7 points back. The others show an easy Trump win of 20 points, with Rubio and Cruz fighting it out for 2nd. There's not a lot in-between. (The most recent polls have gone in the Trump 20+ direction). Florida is a must-win state for Rubio. Polls in most of the state close at 7PM ET. (Projection: Likely Trump as the non-Trump vote will be divided between Cruz and Rubio. Trump is well-positioned to win and gain 99 delegates.)

North Carolina The state proportionately allocates its 72 delegates based on the statewide result. Trump has led every poll this year, currently averaging about 12 points over Cruz. Polls close at 7:30PM ET. Although well back, Kasich seems to have caught Rubio for 3rd. (Projection: Likely Trump. If the polls are pretty accurate, delagate allocation would be roughly Trump 30, Cruz 20, Kasich and Rubio both 11.)

Illinois The state has 69 delegates. 15 of these will go to the statewide popular vote winner. The remaining 54 delegates are directly elected, 3 per Congressional District. There has been a surge of polling in recent days, most showing Trump with about a 10 point lead over Cruz. However, a poll out Sunday from CBS & YouGov gives Trump only a 4 point edge. Polls close at 8:00PM ET. (Projection: Likely Trump for the 15 statewide delegates. No idea what to expect for the remainder).

Ohio This race, with 66 winner take all delegates, could go either way. As of Monday morning, Kasich had a one point lead, on average, over Trump. For the overall race for the nomination, this may be the most important battle of the night, particularly if Trump wins Florida. Polls close at 7:30PM ET. (Projection: Toss-up; either Trump or Kasich will win and gain 66 delegates).

Missouri While outside the top 10 in total delegates, the state still has a significant number at 52. If a candidate exceeds 50%, he receives all 52 of the delegates. Otherwise, the candidate with the most statewide votes gets 12 delegates, with the remaining 40 allocated, in groups of five, to the winner of each of the state's eight Congressional Districts. There has been little polling here; a small sample survey the other day gave Trump a 7 point lead over Cruz with Rubio and Kasich well back. Polls close at 8:00PM ET. (Projection: Nobody gets 50% statewide; Trump or Cruz will win the 12 statewide delegates.)

All Democratic contests allocate delegates (except superdelegates) on a roughly proportional basis, some based on the statewide result, some based on results in individual Congressional Districts. For poll closing times, see the section above.

Florida, where Clinton is averaging a 60-33 lead over Sanders and North Carolina, where the Clinton average lead is 55-34, are expected to be easy Clinton wins. Florida has 246 delegates, North Carolina 121.

The other three states have open primaries and could be much more competitive. A Public Policy Polling series out Sunday showed that independents and Republicans that are planning to vote in the Democratic primary overwhelmingly favor Sanders. Therefore, the proportion of these voters that show up vs. registered Democrats, could prove decisive in each state.

Illinois Overall, Clinton has a 17 point lead, on average. However, the most recent polls all show a Clinton lead of 6 points or less. Perhaps the race has narrowed, or perhaps the pollster assumptions on voter mix is evolving. It's possible that the recent Sanders upset in nearby Michigan, where Clinton's poll lead was 20+, is weighing on the pros here, and in the other two Midwestern states. We'll find out tomorrow. The state has 182 delegates. Projection: Toss-up.

Ohio Recent polls have given Clinton a lead of anywhere from five to 20 points; likely seeing the same issues as in Illinois. Ohio has 160 delegates. Projection: Toss-up.

Bernie Sanders led in the final polling average. When the vote is finalized 36 delegates will be allocated proportionately to those meeting the 15% viability threshold.

These states were flipped by Donald Trump in 2016, each voting for a Republican presidential nominee for the first time in a generation

Alabama moves to likely Republican, while Colorado moves from tossup to leans Democratic

The seat has been vacant since former Rep. Sean Duffy resigned in September

Includes polls from three of the four states with the largest delegate pools available that day.