NBC News and Marist are out with polls from the early primary and caucus states of Iowa, New Hampshire and South Carolina. On the Democratic side, Hillary Clinton dominates, with support of 65% or more of Democrats in all three states. The more interesting Republican results are summarized in the table below. Primary and caucus dates courtesy of FrontloadingHQ. 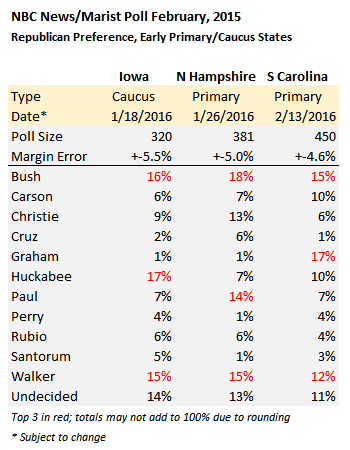 Jeb Bush and Scott Walker had pretty consistent results across the three states and were the only candidates to acheive 10% in all three polls. Bush leads in Iowa, while Mike Huckabee is ahead in Iowa. Lindsey Graham leads in South Carolina, but is a non-factor in the other two polls.  Note that all these leads are well within the margin of error.