Note that the discussion on this page is mostly written around a 269-269 tie between two candidates. However, much of the same would come into play if a third party or independent candidate wins enough electoral votes to prevent any candidate in the race from reaching 270. The 2020 interactive electoral college map allows you to assign electoral votes to a 3rd party.

State House delegations can cast their vote for president from among the three candidates receiving the most electoral votes, while Senators are limited to the top two candidates in their vote for Vice-President.

It is important to note that an apparent tie on election night does not mean that there is actually a tie. The Electors meet on December 14, 2020 (the first Monday after the second Wednesday in December) to cast their votes. Only about half the states have laws requiring their Electors to vote for the popular vote winner. It is possible that an Elector could cast his or her vote for another person. We saw that in the 2016 election, when seven* Electors were 'faithless'.

In a 269-269 tie, as long as that rogue vote wasn’t for the other major candidate in the race, this wouldn’t be an issue. Both candidates would still be short of the required 270. However, imagine a scenario where a single Elector in a single state switched their vote to the other candidate in the tie --- the vote would be 270 to 268. While very unlikely, this kind of vote has happened before (most recently in 1968, although the electoral vote that year wasn’t close).

More than likely, the tie election would remain undecided after the Electors voted. The Congress meets in joint session on January 6, 2021^ to count the electoral votes (this count happens whether the election is close or not). If no candidate has reached 270 Electoral Votes, then the House and Senate take over and elect the President and Vice-President, respectively. Note that the newly elected 117th Congress will be sworn in on January 3rd, 2021. It is that new Congress that would take on this responsibility.

Who would win the presidency in a tie?

In this partisan era, it is a reasonable assumption, at least to start, that the vast majority of members would vote along party lines. That in mind, let's look at who has the majority in each state.

The GOP held a decided 32-17 edge in control of these state congressional delegations prior to the 2018 midterms. With Democratic gains in that election, the Republican edge narrowed to 26-22. In 2019, Michigan Republican Justin Amash became an independent, breaking that state's tie.  As a result the current split is 26-23, with one tie (Pennsylvania).

What about after the 2020 House elections? As noted earlier, it is the new House, seated in January, 2021 that would be voting. We have a new feature for that, called 'State View', that is associated with the House Interactive Map. Try it out for the 2020 Consensus by clicking or tapping the image below. 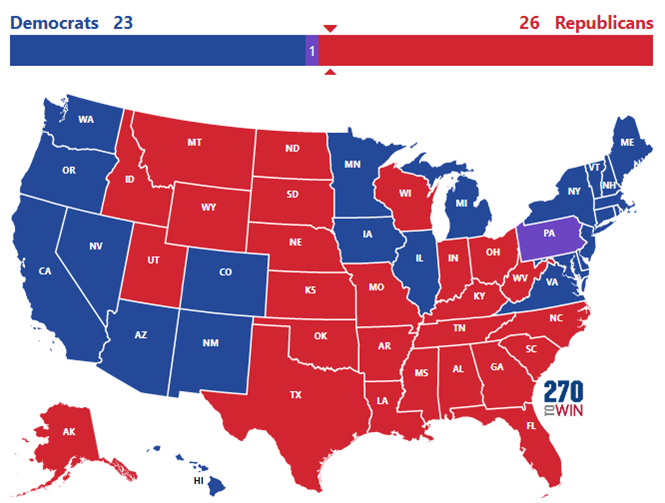 Note that if a majority is not reached in the House vote (e.g., 25-25), that chamber needs to keep at it until the tie is broken. If the deadlock is still in place when the new term starts (noon, ET on Jan. 20), the vice president becomes acting president until such time as the House elects a president.1 1See Section 3 of the 20th Amendment.

*This was a historically high number, most elections have none.

^ Congress can modify this date.