Hillary Clinton's advantage over Donald Trump has eroded somewhat since our last review of electoral forecasts on October 26th. Much of the change has been around forecasters moving states to toss-up that they had previously characterized as leaning toward Clinton.

Several forecasters followed this reclassification with Florida as it has tightened considerably in the polls. Trump has led in two of the last four polls there and only trailing by one in the other two. With its 29 electoral votes, the Sunshine State is pretty close to a must-win for the Republican nominee.

Hillary Clinton now averages 293 electoral votes, down 13 from last Wednesday. Donald Trump is at 183, a gain of four. The changed forecasts are highlighted in bold in the table below. You can find all the associated maps, as well as a few others, on our 2016 Presidential Election Forecasts page. 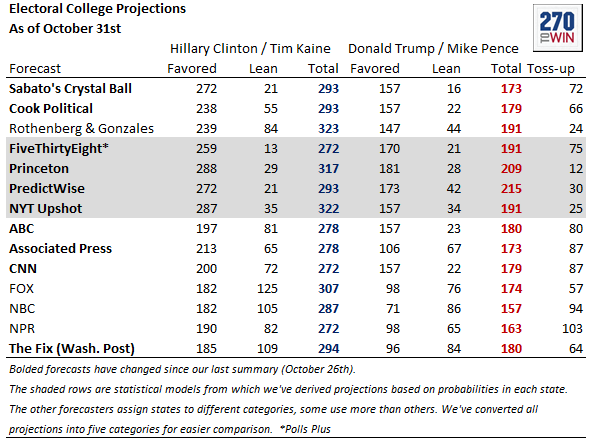