Trump Seen as Debate Winner by More Than 50%

Not too much change from earlier today. Trump dropped slightly, but still finished with 52.5% of the votes. Rubio and Cruz both gained a bit from earlier. The final results chart follows; we've removed the preliminary chart. 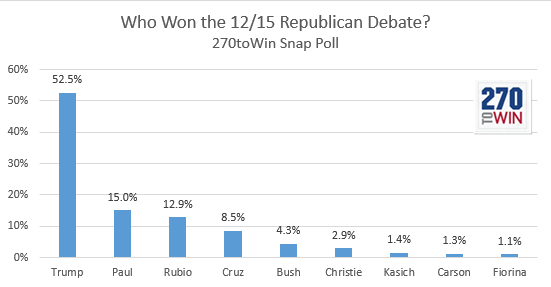 More than 50% of those participating in our overnight snap poll thought Donald Trump won the CNN debate. Despite barely making the cut to appear on the main stage, Rand Paul was 2nd at about 15%. Trump's closest challengers in the national Republican polls, Marco Rubio and Ted Cruz were third and fourth. These two spent considerable time going at each other; it appears neither had a breakout moment.

Fewer than 5% of respondents thought the remaining five candidates won the evening.

Thanks to everyone that participated in our overnight snap poll. While we eliminated obvious duplicate votes from the results, we do want to note that respondents selected themselves to participate. It is therefore not a random sample as would be the goal of a more traditional poll.